Linda Mulinix is a mother of a psychiatric survivor, Michelle, who is 30 years old at the time Linda told her family’s story at the quarterly “Opal Network” meeting in Eugene, Oregon. MindFreedom Lane County is one of the sponsors in this coalition. (Linda’s photo is below.) 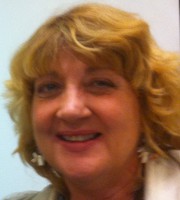 It is incomprehensible to me what happened to my daughter Michelle, now 30, in this day and age of rocket science and bionic arms and legs.

Compassion is given for cancer patients. Compassion and care are given for the blind, deaf and even people in accidents. People can relate.

But when people are diagnosed with a psychiatric disability, the public cannot begin to relate or understand the pain and frustration and hopelessness experienced by the family and the ones who suffer.

First, I wish to thank you all for coming and thanks to David Oaks for allowing me to share.

This is only a glimpse into the life of my daughter as she has been through horrific scenes and situations which would take a book to write. All these incidences took place in Tulare County, California.

At 14 years Michelle was bright sensitive child, a straight A student, but then was diagnosed with early schizophrenia at age 14. Her extreme mental and emotional problems took her life, her personality, her dreams, her dignity. She now believes she is a “retarded abnormal subhuman” with no quality of life.

Doctors and social workers look through her. They see her as a label, not a person. She has been on every medication possible. Zyprexa’s side effects made her gain 300 lbs. in one year. Then it was discontinued because she was pre-diabetic.

During her lifetime Michelle has been hospitalized over 20 to 25 times, often 100’s of mile away from family and friends with no Ronald McDonald house for me. At Merced California hospital her daily activity was to go walk in the graveyard. I have been her only caregiver and provider as she has never lived independently.

Broken relations with self, society, family – this is the essence of receiving a psychiatric diagnosis. With no purposeful work or activities, she is brainwashed that there is NO Hope and will have to take drugs the rest of her life which destroy the mind, body and soul.

We have witnessed many friends in their 20’s 30’s 40’s drop dead over the years from side effects, overmedication or horrific withdrawal. One young man jumped to his death a few blocks from the hospital after being denied services. Michelle has many, many times – wracked with unbearable emotional pain — been denied services and left to walk home in her jammies barefoot in the middle of the night, totally vulnerable.

Many many times when she REALLY needed help she did not get it as no “crime” had been committed and no one was yet hurt. Police would laugh at us and tell us that we liked “to fight.”

Lack of basic services, being hurt and afraid CONSTANTLY, taken advantage of, loss of dignity, inhumane treatment, discrimination, isolation, no voice in treatment, violation of rights, torture — these are accepted as the norm within the mental health system.

I filed many grievances with the county and state for lack of basic services. My statement was “My daughter is like a drowning person, who, when thrown a lifeline, will l not touch it as she is afraid of it.” We won “services” that time.

Four years ago, at the last grievance her counselor didn’t get her to court on time and we lost by default. I’ve written letters to the local paper titled “I can get help for my cat easier than my mentally ill daughter” but they didn’t print it. They refused to interview me or Shell and I was told by Paul Hurley with the Times Delta that lack of and inadequate mental health services was an “open secret.” I wrote to senators, representatives, mayors, governors, presidents, civil rights groups, lawyers, with a few replies for best wishes and a phone number but no end results.

Then, in 2004, Michelle was sentenced to 90 days for small charges. Twice she was electrocuted by a TASER gun in Bob Wiley JAIL in Visalia, CA, WHILE SHE WAS PREGNANT and forcibly taken from her cell at least twice.

Michelle spent 100 days in solitary with no treatment. Her charge? Being under the influence and resisting arrest. After serving over 100 days Michelle was involuntarily sent to California Patton State Hospital to “understand the charges.” There, she was locked up with murderers and rapists. She was then sent back to court, found guilty AGAIN and released. Total time for this? Almost a year.

At Patton State Michelle gave birth to daughter Audri chained to a bed, and was not allowed to hold her own newborn baby.

Michelle was a wonderful mother and she was happiest holding her babies, cuddling them, loving them. This was the happiest time of her life. Audri and Andrew were her whole reason for existing. After the birth of her second child she was given the wrong meds and she decompensated AGAIN. Then, she said an inappropriate comment to a social worker while in extreme emotional distress. CWS took her babies without a fight as she was locked in the hospital with no phone available and unable to speak up for herself. We have never seen the babies since. AudriAnna and Andrew were not abused, drug exposed nor abandoned. She was discriminated against and violated, for having a psychiatric disorder. She has never recovered from the grief. I call it legalized kidnapping.

In 2002 she was hospitalized at Kaweah Delta In Visalia, CA. There she was assaulted with seven stitches to her face. In May of this year she was hospitalized at this same locked facility and assaulted AGAIN by another patient, this time receiving five stitches to her forehead. This month she was hospitalized AGAIN at this same facility I couldn’t even give flowers or balloons to Michelle she was shut away like a leper. I called her case manager and supervisor and didn’t get even a return phone call for five days. Michelle is now in a licensed group home and the last I heard she had been raped. She is now on Neurontin telling me she’s hearing voices again for the first time in many years.

Housing is a huge problem as unlicensed , unsafe group homes cram Mental Health population into windowless rooms and move them at the landlords convenience. They suffer in silence as to speak up would not be tolerated and would be punished. Licensed group homes are rare.

The MEDIA is guilty of generating misinformation and half-truths and misconceptions always portraying the MI as derogatory and dangerous. They laugh at them and point fingers. Would you laugh at a child with cancer? Psychiatry as we know it is not an exact science, often dangerous. My daughter is a human guinea pig.

The Mental Illness System is broken and it doesn’t work. The discrimination against people diagnosed with psychiatric disabilities is shameful, talked about in secrets in the dark. The media portrays one suffering generally as to be pitied, a danger, one to be feared and not tolerated.

The STIGMA and treatment itself are barriers. That must be smashed before the eyes of the general public so the community can understand and change old ideas into new methods of treatment, of healing. Lobotomies were inhumane and eventually outlawed. Electroshock therapy is a modern form of lobotomy. Ask ten people, “What is schizophrenia?” and I get ten different answers.

Survivors need a voice AND choices in their own treatment, community based, family based treatment, compassion, Christian love, understanding. Gently guiding sufferers back to reality is a new form of treatment successfully working in the country of Finland. Dr. Jaakko Seikkula is pioneering and revamping the treatment of the people diagnosed with psychiatric disabilities, with approximately 80% success rate of restoring one’s dignity with minimal medication use. Canada and Australia are also working on more effective treatments. Our own Mr. Bob Whitaker is writing books on this tragic and terrible epidemic in our country.

I have been living in Eugene for almost 1 year now with a new career. I wish to transition Michelle out of her nightmare. Med compliance has never been her problem but she does deal with some alcohol and substance abuse. She does well in structured settings and can live independently with minimal supervision. There are many caring and concerned individuals here. People like David ….

Again, I wish to thank you all for coming and thanks to David Oaks for allowing me to share. As a MOM == Mother’s of MindFreedom – I urge you to support David and MindFreedom as his work is essential to end this living nightmare for our children. Mother’s of MindFreedom are uniting and breaking down barriers and searching for more effective treatment. We will never give up. As an advocate for this movement I want to thank you for listening to Shell’s Story and If you have any resources or ideas available to me please inform me after the meeting.

January 16, 2011
GET INVOLVED!
Want to be among the first to hear directly from us about our work? Sign up now.
Go to Top