Mary Maddock of MindFreedom Ireland has written a book with her husband Jim about her escape from psychiatry and activism to change it, called “Soul Survivor.”

‘Soul Survivor – A Personal Encounter with Psychiatry’ launches today at Nemo Rangers GAA club on Monday, December 11th at 7pm.  Written by Cork couple Mary and Jim Maddock, the book tells the harrowing but ultimately inspiring story of Mary’s involvement with the Psychiatric Establishment over a period of twenty years.  In the Foreword, well-known psychotherapist Dr. Terry Lynch, author  of ‘Beyond Prozac’, states “This book should be required reading in training courses for psychiatrists, G.P.s and all involved in the provision of mental health services.”

On leaving the convent after seven years in 1972, Mary had met and married her husband Jim by 1974. Within a further two years, she found herself in Sarsfield Court Psychiatric Hospital, two days after the birth of her daughter.  Heavily medicated and subjected to many sessions of electro-convulsive therapy, it was the beginning of a nightmare that saw her admitted to a further three psychiatric hospitals – the GF wing of Cork University Hospital, St. Anne’s (now Carrigmor) in Cork and St.Patrick’s in Dublin. 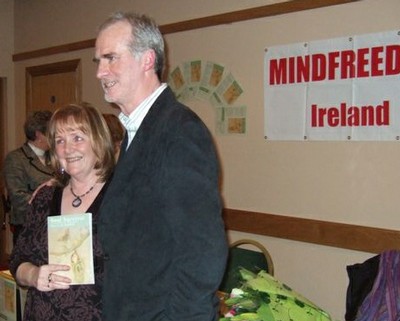 Mary was branded a ’manic-depressive’ and put on a cocktail of drugs, including lithium for the next 18 years. Supposedly ‘well’ and out of hospital, in reality she was reduced to a piece of psychiatric flotsam – an overweight, stiff-limbed, kidney-damaged, drooling, tremor-ridden, mind-numbed, middle-aged woman.

Then in 1993, a completely fortuitous event marked a turning point in her life.  With the help of people like Dr. Peter Breggin and Dr. Terry Lynch, of organisations like The Cork Advocacy Network and MindFreedom, she began to challenge the orthodox thinking of the Psychiatric Establishment and
began her brave, slow, scary but ultimately empowering journey of liberation from its clutches.

She and Jim now also began to attend conferences, speak out on television and in the press and
established MindFreedom Ireland. Both are also members of Sli Eile, the Cork Housing Association for former psychiatric patients and today continue their campaign of activism for human rights in the mental health area, specifically in relation to the over-prescription of drugs, forced injections, involuntary detention and the use of electro-convulsive therapy.

The launch will be performed by well-known Cork poet and mental health campaigner John McCarthy. ‘Soul Survivor’ (€12.95) is on sale in all good bookshops in Cork and surrounding towns and can also be purchased online at www.asylumonline.net.

“Mary Maddock is more than a survivor.  She and Jim are trailblazers creating a way out of the mess
we have made of psychiatry.”  —  (Kathy Sinnott, Member of the European Parliament.)

Mary is one of the founders of MindFreedom Ireland.

December 8, 2006
GET INVOLVED!
Want to be among the first to hear directly from us about our work? Sign up now.
Go to Top