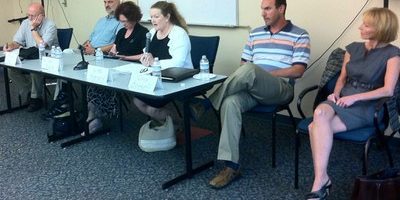 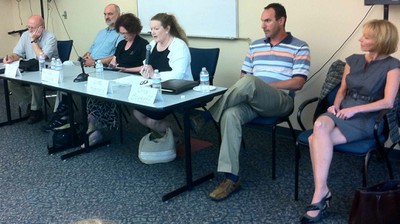 On Tuesday August 30, 2011, the National Alliance for Mental Illness also known as NAMI held an open meeting at the Lane County Mental Health Building in Eugene, Oregon, giving the public an opportunity to hear about the issues regarding Oregon’s State Psychiatric Hospital’s (OSH) and the proposal to build a new facility in Junction City.

Speakers for the meeting were (pictured above, click here for close-up):

Linda Hammond and Valerie Hoyle were the only two on this panel holding positions allowing them the authority to vote on the behalf of Oregonians regarding the fate of those committed in Oregon State Psychiatric hospitals.

Before hearing from the five panelists, Angella Kimball, director for NAMI state policy, presented a brief and overarching account of problems patients face in Oregon’s state psychiatric facilities. A major focus was Oregon State Hospital (OSH) in Salem, famously known as the institution where “One Flew Over the Cuckoo’s Nest” was filmed. There is also a branch of OSH located in Portland.

Kimball reported the conditions at OSH in Salem caught major attention in 2002 when a patient was verbally abused without hospital staff realizing his family’s social ties. Allegations of mistreatment in OSH alerted State and Federal authorities leading to many investigations since 2003. These investigations have uncovered a shocking trail of horrendous abuse and outrageous living conditions.

In Aug. 2004, Gov. Ted Kulongoski’s inspection stated the standard of care at OSH “is atrocious.” In Sept. 2004, other official investigations revealed, “Oregon allowed two of its employees to molest a mentally ill girl in their care and then paid her to keep quiet.” In 2005, OSH made headlines after rows of “cremains” were discovered in the hospital’s basement.

Negotiations with authorities continue to stall as representatives say the lack of State funds for Community Based Programs cause over crowding in OSH. A large percentage of committed patients are needlessly being held without justification as to why they are still there when these patients would be better served in discharged placement programs.

Then in Oct 2009, Moises Perez dies and lay’s in his bed across from the nurses station for hours before he was found. In light of his death, US Dept. of Justice sent another letter citing OSH’s obligations under the Americans with Disabilities Act as conditions continued to be a great concern. “Our Defunded Economic times” is the running scapegoat for not taking actions sooner.

Under this mounting pressure, representatives now claim that Oregon can afford a new 280+ million dollar state psychiatric facility as a way to fix the problems: A 620-bed psychiatric unit in Junction City and another 300-bed unit down the road. Their first target to finance this is the already deflated funds for Mental Health Community Based Programs including programs for discharge placement. In a conversation with Senator Harkins, he was quite surprised to hear that the State is building a new hospital and questioned if it is publicly known or if it is a secret?

After Kimball’s report, Charlie Wright told a story of a young man currently committed at OSH. This man was walking down a sidewalk, stopped and yelled towards a group in the distance who were golfing. Unfortunately, one of the men golfing held a high professional title and it was later found that this young man was not taking the psychiatric medications that were being prescribed to him. After several years committed in OSH, this man has 10 more years to go for merely raising his voice and yelling towards a crowd.

Towards the end of the meeting there were several questions that seemed to spark some attention. Valerie Hoyle was asked about her education on alternative treatments in mental health care and her attendance to two highly regarded documentaries recently shown in Eugene. These movies are centered on successful alternative treatments implemented for mental health clients outside the U.S.

These alternative treatments are far more humane, costing fractions compared to Representatives’ quest for a new hospital. Hoyle listed her qualifications, but tried to avoid answering questions regarding her education on alternative mental health treatments. Then she stated that she did not attend either one of these movies. In a display of defense, Hoyle made a quick shift to the front edge of her chair. With hard-pressed lips and her finger pointed at the attendees she raised her voice and snarled at the crowd.

Despite all of the reporting about OSH history of abuse and overcrowding, there is more interest in the creation of new jobs for Junction City and it’s neighboring areas, rather than providing better services for those who receive mental health care. State Representatives say that Oregon can afford to spend millions during difficult economic times to build another hospital and claims “this” is the way to solve horrendous issues of abuse and overcrowding.

After we heard about the young man on the sidewalk and Valerie Hoyle’s reaction at the end of this meeting I find myself wondering, “Is the difference between those who supposedly need these beds and those who push to build them the fact that one has a label and the other holds a title?”

It seems quite clear that questionable actions in public can be disregarded by technical difficulties with video for some and others will be strapped to beds. A young man will lose 12 years of freedom and I struggle to see the crime he committed. I overheard one of the panelists assert, “We need a place to put all of these people… some are waiting on the Johnson Unit more than a month for a bed in the state hospital.”

I question, “Is there an agenda to create criminals out of those who have psychiatric diagnoses in order to create jobs at their expense?”

This meeting was video recorded for public view. Unfortunately, due to technical difficulties the last 15 minutes were not recorded.

Lynne Salvi lives in Eugene, Oregon and says, “I’ve been actively focusing my energy on raising awareness with compassion for all.” The opinion expressed is that of the author, who is solely responsible for the content.

September 6, 2011
GET INVOLVED!
Want to be among the first to hear directly from us about our work? Sign up now.
Go to Top