Occupy Psychiatry – a project of PsychRights and MindFreedom International – are holding a protest of E. Fuller Torrey’s appearance at the Heritage Foundation. Dr. Torrey is widely considered one of the main proponents of increasing the number of Americans on forced psychiatric drugs. 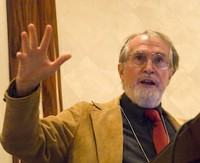 Urgent Alert — In Less Than 48 Hours:

Drugging of Americans in their Homes, to Speak

The Heritage Foundation web site claims it is for “limited government” and “individual freedom.”

But this Wednesday, 18 July 2012, this very same Heritage Foundation is spotlighting one of the main crusaders for the very worst of Big Government: psychiatric tyranny.

On Wednesday, July 18, 2012, the Heritage Foundation in Washington D.C., is hosting a talk by E. Fuller Torrey, M.D. (photo above) widely considered to be one of the top pushers for laws making it easier to force psychiatric drugs into Americans, even if they are living peacefully in their own homes out in the community.

With very short notice, Occupy Psychiatry, a new joint project by the Law Project for Psychiatric Rights (PsychRights) and MindFreedom International, will be at the presentation to counter Torrey’s falsehoods. With less than 48 hours to go before the event, activists are asking people to contact concerned people in the Washington, D.C. area.

To stay in touch with other “instant actions: connect on this new Facebook page:

The Occupy Psychiatry Facebook project emerged from the successful protest of the American Psychiatric Association this Spring, for photos and videos of that event go here:

The Heritage Foundation may find a lot of others on the right are not pleased. Right wing activists from Rush Limbaugh to Michael Savage have personally blasted the massive promotion of psychiatric drugging, especially in children.

Said David Oaks, Director of MindFreedom International, “There are right wingers and left wingers and libertarians who are true to their ideals, and who are outraged at the crime of extreme psychiatric drugging of the USA population, especially young people. Opposing psychiatric abuse unites a lot of red and blue voters. May the Heritage Foundation find out soon they made a mistake by promoting E. Fuller Torrey’s bizarre, tyrannical, anti-American values.”

ACTION – Please forward this news to others, especially in Washington, D.C. area.

If you did not get this alert directly from mindfreedom-news, sign up for this free public alert list here:

More information about this event…

July 17, 2012
GET INVOLVED!
Want to be among the first to hear directly from us about our work? Sign up now.
Go to Top