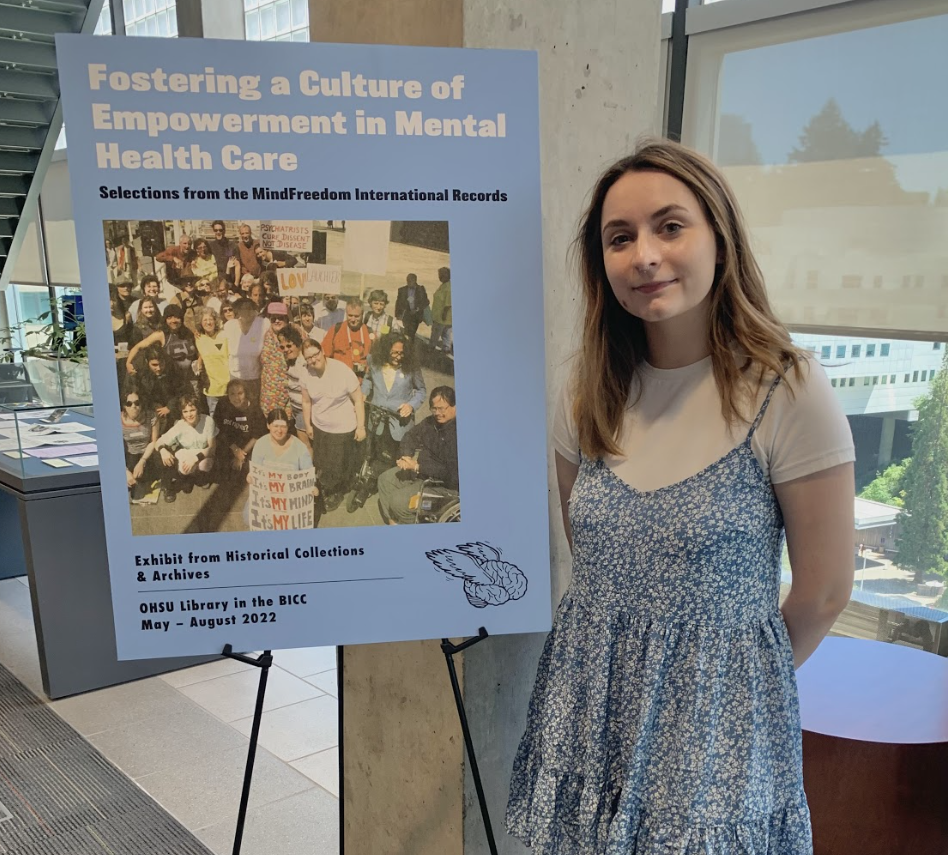 Maria Rose at the MindFreedom International exhibit at OHSU.

On June 27, 2022, I had the opportunity to visit Oregon Health & Science University’s (OHSU) newest exhibit in Portland featuring dozens of artifacts from the history of MindFreedom International, including artwork, photos, newspaper clippings, and other materials. Telling the story of David Oaks and other key figures from the Psychiatric Survivors’ Movement, the archive illustrates resilience and advocacy in the resistance to forced psychiatry. This exhibit, curated by Zoë Maughan, is on display until the end of August. Being that July is both Mad Pride Month & Disability Pride Month, there’s no better time to learn more about the foundations of this movement and its lasting effects.

Unfolding the History of the Psychiatric Survivors’ Movement

The 1970s came with the psychiatric emphasis on biological thinking. Combatting previous models of therapy and psychoanalysis, psychiatry became extremely medicalized. Suddenly, previous therapies were replaced with drugs such as lithium, antidepressants, benzodiazepines, and other tranquilizers and sedatives [1]. As psychiatry continued its focus on more medical and pragmatic approaches, many were placed into inpatient institutions. Furthermore, release from these institutions was contingent on diagnoses and monitored behavior. However, almost anything could be determined to be a symptom of “mental illness,” and once you were diagnosed as having a “sick mind,” anything you did was merely a symptom of “mental illness.” 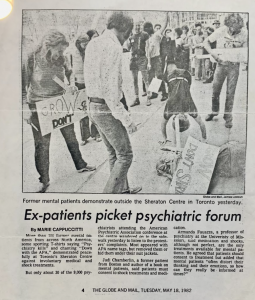 Featured in the archive is this photo of psychiatric survivors picketing a psychiatric forum in Toronto.

Referencing this medicalization, Judi Chamberlin writes, “Once it has been decided that a person has a sick mind, enormous social consequences ensue.” She continues, “Those who resisted were further pathologized and let to more intensive treatments” [2].

The Psychiatric Survivors’ Movement first emerged in the 1960s inspired by the Civil Rights Movement. As consumers of mental health services were released from their institutions, their histories of psychiatric abuse and human rights violations formed the foundation for their liberation. What followed was revolutionary: protests against the American Psychiatric Association, the release of foundational texts and artwork, the emergence of support groups, and the creation of long-lasting organizations. Activists like Judi Chamberlin, Howie the Harp, Jim Gottstein, David Oaks, Leonard Roy Frank, Mary Maddock, and others fought to take back the power of psychiatry, create consumer autonomy, and contested dominant ideologies surrounding pathologization. 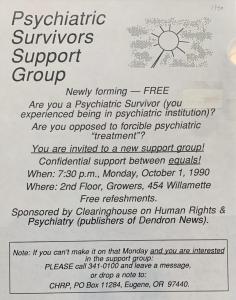 The Psychiatric Survivors’ Movement challenges both clinical practices and definitions of normality. In doing so, one of the movement’s greatest undertakings continues to be the push for consumer autonomy. Today, mental health consumers are not provided with complete independence in their care. While States vary in their legislation, involuntary holds continue to exist if an individual is deemed to be a danger to themself or others. During emergency holds, providers can petition for involuntary medication [3]. Because of this, the Psychiatric Survivors’ Movement continues to emphasize the importance of consumer rights and accessibility. Resources provided by the movement include both peer-led alternatives to mental healthcare and organizations such as MindFreedom’s Shield support that work to stop forced drugging, guardianships, and commitment.

In their resistance to psychiatry, the Psychiatric Survivors’ Movement continues to reframe dominant ideologies regarding what is “normal.” A poster from MindFreedom International (MFI) from 2013 reads “Boycott Normal.” David Oaks writes, “As a psychiatric survivor, I know that I spent many years rebelling against & resisting the bizarre, ridiculous, unscientific, goofy, demeaning labels found in the Diagnostic & Statistical Manual of the American Psychiatric Association [4].” In boycotting what psychiatry deems as standard, the Psychiatric Survivors’ Movement continues to promote radical self-acceptance and what many call “Mad Pride.” 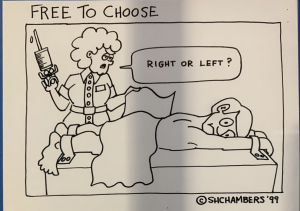 A cartoon used for a t-shirt design by MindFreedom (1999)

As I mentioned before, July is both Mad Pride Month & Disability Pride Month. Celebrating their resilience, community, and differences, the Psychiatric Survivors’ Movement continues to fight for one another today. One of the recent victories in the movement toward psychiatric alternatives is the passing of House Bill 298. Executive Director of The Oregon Mental Health Consumers Association, Kevin Fitts, has worked tirelessly to provide peer respite services for many years. With the passing of this bill, state funding will be provided to short-term facilities for people experiencing crises.

Alongside this, psychiatric survivor David Oaks has continued to fight for human rights with MindFreedom International, providing educational resources, consumer alternatives, and Shield support. The fight against forced treatment, sanism, and ableism is far from over, however, the victories of the Psychiatric Survivors’ Movement have created a foundation to continue the path of resistance and advocacy today.

If you’re interested in visiting this exhibit, visit here to learn more.

Also, to find out about the OHSU MindFreedom archive itself, visit here.

[1] Shorter, Edward. A History of Psychiatry: From the Era of the Asylum to the Age of Prozac. Wiley, 1998.

[2] Chamberlin, Judi. On Our Own: Patient-controlled Alternatives to the Mental Health System., 1978. Print.

[3] Tseng, Ada, & Hannah Collins. “How Does Involuntary Mental-Health Treatment Work, and What Rights Do Patients Have?” Los Angeles Times, 5 Oct. 2021.

To be in contact with MindFreedom interns, email interns@mindfreedom.org

July 12, 2022
GET INVOLVED!
Want to be among the first to hear directly from us about our work? Sign up now.
Go to Top