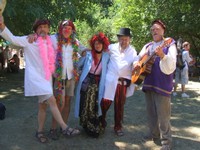 WHAT’S THE BACK STORY ABOUT MAD PRIDE?

Mad Pride may be celebrated anytime butis most often observed in the month ofJuly, usually on or around July 14,Bastille Day. 2011 marked the 30th anniversary of psychiatric survivorsusing Bastille Day to celebrate Mad Pride.

The tradition of using Bastille Day asMad Pride Day was started in New York bythe Mental Patients Liberation Allianceand has since spread around the world.The 14th of July marks the anniversary ofthe storming of the Bastille in Paris,France in 1789. For over the past twocenturies, the storming of the Bastillehas been a universal symbol ofliberation. In addition, when theBastille was stormed, two prisoners withpsychiatric labels being detained therefor that reason were freed.

The Mad Pride celebrations have growndirectly out of an historic but little-knowninternational social change movement ledby psychiatric survivors and mentalhealth consumers that began in about1970. MindFreedom International is oneof the groups in this movement.

The name “Mad Pride” got its start in Londonwhen activists there saw a Gay Prideevent and got madly inspired!

IS MAD PRIDE ONLY FOR PSYCHIATRIC SURVIVORS?

This movement is open to ALL, whether ornot you have personally been labeled bythe psychiatric system. Mad Pride isreally about Human Pride. Yes, givenhumanity’s track record, Human Pride mayseem daunting. Mad Pride celebrates howeach person’s eccentricities, passion,uniqueness and freedom makes you trulyhuman. Do not allow our very humanity tobe pathologized by a corporate mentalhealth system that has gone out ofcontrol! Celebrate YOUR Mad Pride!

IS USING THE WORD “MAD” STIGMATIZING?

About the use of the word “mad”: when MindFreedom International’s greatteam is in the United Nations — as it hasbeen for four years — we tend to usemore “widely-acceptable” language; nevertheless, we feel that an important facet of consumer/survivor empowerment involves doing asGay Pride has done and reclaiming languagefor our own creative, positive use! Theorigin of the word mad is simply “changed.”If you choose not to say “mad,” that’s okay.

HOW CAN I BECOME A LEADER OF MAD PRIDE?

YOU ARE INVITED to be part of helping tonetwork, promote and organize future MadPride events! It’s easy. Just join the non-profitorganization MindFreedom International athttp://www.MindFreedom.org, and thenapply to be on the MindFreedom Mad Pride Campaign Committee. Or e-mail for moreinfo to office@mindfreedom.org. Includeyour postal address if you’d like a sampleof the award-winning MindFreedom Journal.

BUT WHAT CAN I DO RIGHT *NOW* FOR MAD PRIDE?

You may celebrate in your own waywherever you are!

PLEASE REMEMBER: One way to show yourMAD PRIDE right *now*, is simply toforward, copy and post this to appropriateplaces on and off the Internet!

And please TALK ABOUT THIS, break thesilence with your friends, relatives,colleagues. Ask them, “Did you know thisis Mad Pride month”? Point them to theweb site https://mindfreedom.org.

September 8, 2006
GET INVOLVED!
Want to be among the first to hear directly from us about our work? Sign up now.
Go to Top