Here is a report and photos from a successful grassroots protest. Deborah Schwartzkopff is a survivor of multiple electroshocks (electroconvulsive therapy or ECT) in Oregon private psychiatric institutions. She single-handedly called for a peaceful protest on Wednesday, 27 June 2012, in front of her shock facility, 12 miles south of Portland in Clackamas, Oregon. MindFreedom helped sponsor the protest. (Updated 6 July 2012.)

Deborah Schwartzkopff, RN organized this protest of electroshock on 27 June 2012 in Clackamas, Oregon.

Deborah Schwartzkopff identifies herself as a survivor of electroconvulsive therapy, also known as ECT or electroshock. In ECT, electricity is run through the brain, inducing a convulsion, supposedly to treat psychiatric problems.

Ms. Schwartzkopff called for an electroshock protest, MindFreedom helped publicize it, and protesters say it went well. A total of 14 people participated, including Deborah’s psychiatrist, Dr. Malika Burman, MD, and several of Deborah’s relatives. Most protesters are shown in the above right photo, click it for a close-up.

They held up signs at the intersection of Sunnyside & Stevens roads, directly in front of Kaiser Sunnyside Hospital in Clackamas, Oregon, from 4:00 to 6:00 pm.

Those present said this is an extremely busy intersection, with lots of exposure, and there were lots of supporting honks from passing cars.

Those in attendance included Cindi Fisher from the group MOMS (photo on right); Alan Smith from Rethinking Psychiatry); Dr. Burman & daughter; plus four people from Citizens Commission for Human Rights of Oregon, including Ron Hatteberg, who provided the protest photographs here.

Just One Electroshock Survivor Made a Difference 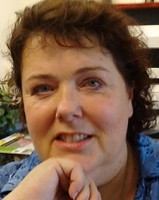 Deborah Schwartzkopff (photo on lower right) identifies herself as a survivor of electroconvulsive therapy, also known as ECT or electroshock. In ECT, electricity is run through the brain, inducing a convulsion, supposedly to treat psychiatric problems.

Ms. Schwartzkopff, who notes she is a Registered Nurse (RN), initiated the call for a peaceful protest directly in front of the facility she says administered her electroshocks: Kaiser Sunnyside Hospital. MindFreedom International’s Initiative on Electroshock and Human Rights helped to sponsor the protest.

She said the psychiatrist electroshocked her without her true informed consent, and she was not adequately warned that it would cause memory loss.

In an interview with Ms. Schwartzkopff by MindFreedom, she said the last time she had her electroshock was 2010. All told she has had more than 60 of them, from the years 2003 to 2010. She reports experiencing devastating memory problems.

During the recent years 2009 to 2010, Ms. Schwartzkopff said she had 36 electroshocks that were ‘bilateral,’ that is, the electrodes were affixed to both sides of her head, impacting both hemispheres of her brain.

MindFreedom has received other complaints of electroshock throughout Oregon.

She mainly tried to get others that are survivors of electroshock to stand by her, but all allies are encouraged to offer their support. If you would like to thank her for her protest, or network with her, Deborah is at 503-537-0997 or jsds1774@gmail.com.

In January 2011, the only US Food & Drug Administration public hearing about the electroshock devices concluded that for most purposes, the efficacy and safety of the ECT device has not been proven.

Oregon has one of the two USA manufacturers of the electroshock device, MECTA. Oregon Health Sciences University (OHSU) is a well-known promoter of ECT, and even pioneered the experimental “multiple monitored” ECT where several jolts are given at one session – something that Ms. Schwartzkopff said she has experienced.

For more info about electroshock, see the MindFreedom Knowledge Base.

June 22, 2012
GET INVOLVED!
Want to be among the first to hear directly from us about our work? Sign up now.
Go to Top