A volunteer agency at Harvard featured my story. Here are a few reflections about Harvard grad psychiatric survivors (see photo of four of us). Can reach more members of the Harvard community? 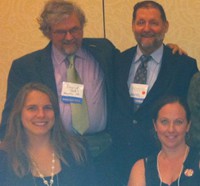 I thank PBHA for placing me as an intern in my senior year in one of the early psychiatric survivor activist groups, Mental Patients Liberation Front.

You can view my story about 1976 directly here.

Or at the moment view it via PBHA’s home page here.

Whenever I talk about having graduated from Harvard, such as in my little ‘biographies,’ I almost always mention something like this:

I think I mention this class stuff because I feel there can be a strange prejudice when one mentions Harvard.

Graduating from Harvard is a little like getting one of those nifty awards from Dorothy at the end of Wizard of Oz: A widely-respected symbol that may help self-esteem, but the boost works best when affirming something real which everyone – absolutely everyone – already had all along.

When I mention I went to Harvard, I’m afraid someone will think I’m a “one percenter,” as the USA Occupy movement puts it. Well, I support the positive work of Occupy. I’m not a percenter. But if I were? Martin Luther King said he was creating a ‘beloved community,’ including reconciling with everyone, one percenters included.

Our movement of Marginalized and Disempowered (MAD) needs all the help we can get. Can we do more to reach the Harvard community?

Healing with Other Harvard Psych. Survivors

This Fall I was pleased to interact with a few other Harvard psychiatric survivor grads. Above is a photo of four of us (Laura Delano and Denise Maratos on bottom; myself and Jim Gottstein on top; click here for more detail).

At the October 2011 conference in Los Angeles of the International Society for Ethical Psychology and Psychiatry (ISEPP), I coordinated a panel of psychiatric survivors. At the end I invited about a dozen other psychiatric survivors onto the stage to briefly recap their own stories.

For a group photo I arranged it so that four of us who were psychiatric survivor Harvard grads were together. I found chatting even briefly with these friends deeply healing, thank you. This re-inspired me to reach back to Harvard folks.

In the last couple of years I’d tried a few other ways to reach out to the Harvard community for a variety of reasons:

How Else Can We Reach the Harvard Community?

If you know a Harvard grad or community member, please encourage him or her to consider some of the below actions to help connect up the Harvard community with efforts to occupy our mental and emotional well being.

If you have other suggestions, let me know.

December 30, 2011
GET INVOLVED!
Want to be among the first to hear directly from us about our work? Sign up now.
Go to Top