Help free Shield member Jill Kesti, who was taken by force from her home in Ontonogan County and driven ten hours to Grand Rapids by a sheriff where she is being forcibly drugged, deprived of her civil liberties. 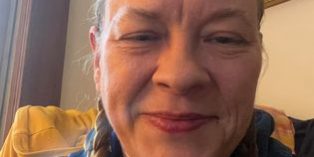 This alert originally was posted on May 7, 2021

Please call or write to the psychiatrist who is seeking to have Jill put on a long-term injectable ‘anti-psychiatric’ drug which Jill opposes.

During a recent hearing at Pine Rest Christian Mental Health Facility, Jill was visibly shaking, a sign of Tardive Dyskinesia (TD) a well documented side effect of the Haldol she is forced to take at Pine Rest when involuntarily committed there, as well Depakote, which she was forced to take for months in her home while under an involuntary outpatient treatment order. The star witness for the state at Jill’s hearing (the one listed above) psychiatrist offered no counter evidence for Jill’s evidence.

Her body is the evidence. She was visibly shaking, a sign of TD. Jill expressed a fear of being permanently disabled by TD.

Also, it was notable that the psychiatrist did not address the issue that Jill’s outpatient ‘treatment’ foisted on her in her own home in Ontonogan County does not appear to be helping Jill whatsoever. The very complaints that were lodged by Ontonogan County mental health care workers such as her ‘untidy’ house could be directly related to her treatment. Lack of motivation is a well documented side effect of dopamine inhibiting drugs. Jill stated numerous times in the hearing that she had tried to organize her home but felt overwhelmed at times. Why can’t Ontonogan County mental health care workers, instead of obsessing over Jill’s drug intake, provide weekly support in the way of housecleaning services? Also, Jill has asked repeated for non-drug, non-force alternative ways of helping her cope with grief and trauma, including the trauma of solitary confinement, forced injections, and restraints, all compliments of Michigan’s mental health system.

Jill stated that the most helpful therapy she ever received was a treatment known as EMDR. Why isn’t the county helping Jill get access to EMDR which Jill finds helpful? Why aren’t they providing her with wrap around services to help her live safely in her own home?

Any way you look at Jill’s situation, her outpatient ‘treatment’ appears to have been harming more than helping Jill, but rather than mental health workers in Ontonogan County holding themselves accountable for a ‘treatment’ that appears to be failing miserably, Jill is herself demonized, shamed, and gaslighted as a ‘non-compliant’ patient who must be subjugated and demoralized even further by sending her back to Pine Rest, a ten hour drive from her community.

What is wrong with Ontonogan County mental health system? We need to launch an investigation into their complete and utter disregard for Jill’s rights.

In Jill’s recent hearing at Pine Rest, many false claims about her treatment ‘non-compliance’ were raised which Jill denied vigorously. In fact, Jill had been compliant for many months with her forced drugging order, in Ontonogan County, out of fear of retribution. If the Ontonogan County mental health workers were concerned about Jill’s behavior leading up to her re-hospitalization at Pine Rest in Grand Rapids , they should be questioning their ‘treatment’ failure, not Jill, whose enormous spirit remains unbroken, despite the bullying tactics of the Ontonogan County mental health system.

Please call or write to Jill’s temporary psychiatrist who has been assigned to her while she is at Pine Rest. Please tell him what is really going on. Please tell Dr. Desai, that it is the lack of non-drug, non-force options that are driving Jill to madness. Please tell him that justified rage and anger when one has been robbed of all choice and personal agency cannot be ‘medicated’ away. Jill needs to be presented with real choices and compassionate support to help her deal with grief and loss, not more of the same: forced injections, restraints, and seclusion.

Jill is opposed to her ‘treatment’ with a ‘depot’ injection. The judge read ‘evidence’ from county mental health workers who were not present at Jill’s hearing, citing her ‘non-compliance’ with past outpatient drugging orders, which Jill denies, and her untidy home as the justification for Jill’s most recent incarceration at Pine Rest Christian Mental Health Facility.

One wonders how many of us with untidy homes are at risk of forced drugging orders if we have a past psychiatric diagnosis.

Once the time release drug is in her bloodstream, Jill has no controlserved as the star witness at a kangaroo hearing held at Pine Rest

Call her at the Aspen ward by calling

Although Jill is not a danger to herself or others, she was taken a second time, to Pine Rest which is a ten hour drive from her home. She has consistently advocated for her right to receive non-force, non-drug support to live peaceably in her own home, her right to safely taper off drugs which she says are causing her harm, and her right to receive grief counseling for her losses: the loss of her civil liberties, the loss of ability to have children, loss of her employment, and loss of her good health. She has been living peaceably in her own home, but is not being offered any non-drug, non-force options to support her needs and values.

If you can find an alternative way of contacting Mark Eastburg, please let us know at office@mindfreedom.org.

The Pine Rest Christian Mental Health Facility has a Foundation that relies heavily on donors, therefore they care about their public image. Please let the director of the PRCMHF that donors may no longer wish to support a facility that kidnaps Michigan residents and forcibly drugs them.

Please let staff know, that Jill has developed an intolerance to Haldol, the drug she is court ordered to take. If she resists, they will threaten to inject her by force. The haldol is causing her to experience a disabling, potentially irreversible movement disorder called tardive dyskinesia.

Jill has been fighting a court order to remain on a drug called Haldol which belongs to a powerful class of drugs known as ‘anti-psychotics’ even though they do not correct any known chemical imbalance. She was subjected to a court ordered ‘treatment’ while living peaceably in her own home in Ontonogan County. Without the means to pay for adequate counsel, she has been unable to overturn this order. After a year being forced to take this powerful drug, her physical, mental, and emotional health has been deteriorating. This is evident to all who know her well. Haldol is known to cause adverse and paradoxical reactions. Some people experience problems of thinking or living while under the influence of this drug. Some develop akathisia, an unbearable feeling of inner torment and restlessness. Others have reported insomnia, hostility, aggression.

MFI was disturbed to learn that Shield member Jill Kesti, founder of Coaltion to End Forced Psychiatric Drugging, is herself being forcibly drugged and held against her will at Pine Rest Christian Mental Health Services. She is being deprived of all her personal belongings including her phone. She has been held down and forcibly injected three times with powerful, psychiatric drugs since being detained. Jill is activating her Shield and asks for your help!

Ask Dr. Plattner why he is not honoring Jill’s repeated requests for non-force, non-drug alternatives.

Post words of encouragement to Jill on her Facebook group, Coalition to End Forced Psychiatric Drugging HERE or on her personal FB page HERE

May 7, 2021
GET INVOLVED!
Want to be among the first to hear directly from us about our work? Sign up now.
Go to Top