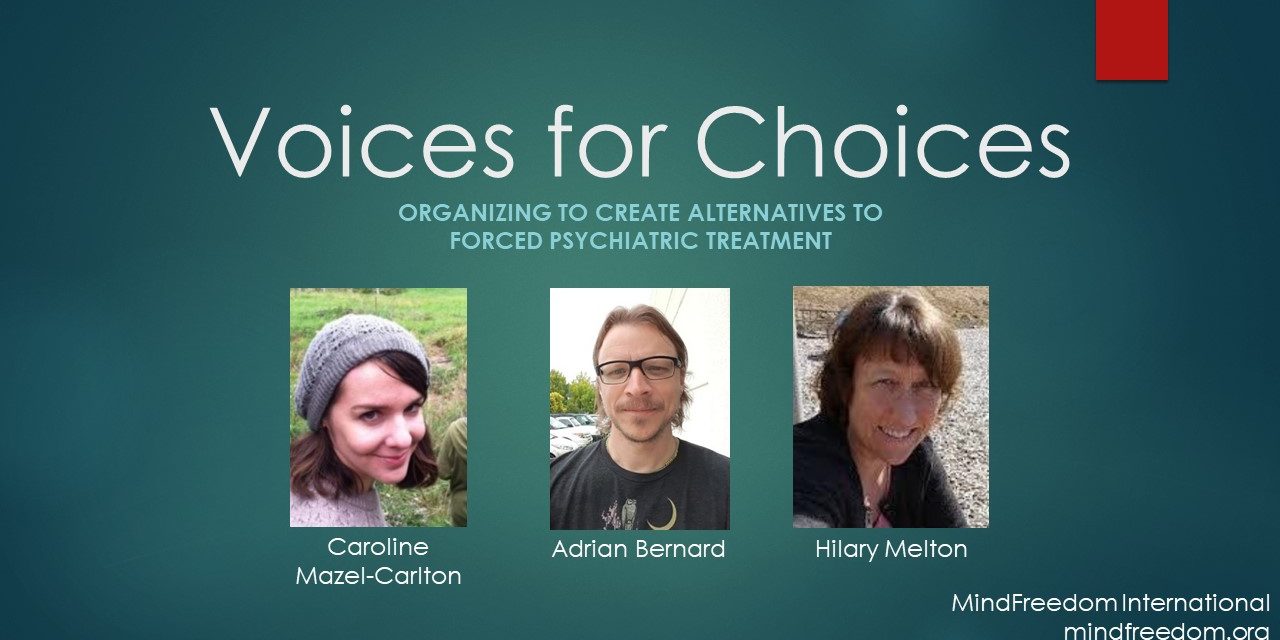 Since many mental health ‘experts’ are calling for the government to expand forced drugging and shock, our need to organize has never been more important! With generous support from the Foundation for Excellence in Mental Health Care, MindFreedom International is hosting a webinar entitled: “Voices for Choices: Organizing for Alternatives to Forced Psychiatric Treatment”.

“Voices for Choices: Organizing for Alternatives to Forced Psychiatric Treatment”
Webinar Description
Voices for Choices: Organizing For Alternatives to Forced Psychiatric Treatment  features panelists Adrian Bernard, Caroline Mazel-Carlton, and Hilary Melton who will present their findings from years of working with people in distress without forced drugging and shock.  This webinar will help you
WEBINAR PRESENTERS
Caroline Mazel-Carlton
has laid her head in a number of places, from Indiana jail cells to Texas psychiatric units, but now enjoys a freer existence as Director of Training for the Western Mass Recovery Learning Community and the national Hearing Voices Research and Development Project.  A proud voice-hearer and visionary, she has supported the development of the Hearing Voices Network in every time zone of the United States.  She founded the world’s first Online Hearing Voices group and one of the first long-term hospital groups in the United States.  Caroline (and her voices) have been featured in the New York Times and Foreign Policy magazine.
​​Adrian Bernard
works at Santa Cruz’s peer respite house, named 2nd Story. Since its beginning, seven years ago, he has stood alongside many degrees of suffering, loss and exhaustion. As a result of such human dilemmas, he has walked with each toward joy, bliss, hope and possibility. Adrian currently serves as the manager of 2nd Story. As a program, 2nd Story holds the ideal that people who have the least, may yet gain the most. We have a thriving community. 2nd Story works closely with the provider community to offer a wealth of compassion and connection. What was new to the system is now integrated and held in the highest regard. On the side, Adrian works with others to build a new peer-run organization, called the United Peer Movement. It is community activism at its finest!
Hilary Melton
I have two bumper stickers on my red Suzuki. One says “Housing First,” which is a model of ending homelessness to which I have dedicated most of my working life; the other says “Nothing About Me, Without Me” which speaks to my core values of individual choice and self-determination. I am also passionate about human rights, social justice, and building solutions that are research-based, effective, efficient, affordable, and replicable. I have 20 plus years experience managing non-profit programs including the first Housing First project founded by Dr. Sam Tsemberis in New York City in 1992. I have worked in shelters, street outreach, and administered supported housing programs in New York City and Vermont. I am the founder and current Executive Director of Pathways Vermont which has been providing housing and innovative mental health services in communities across the state of Vermont since 2009.

July 25, 2018
GET INVOLVED!
Want to be among the first to hear directly from us about our work? Sign up now.
Go to Top