Stop Silencing Challenges to the Authority of Organized Psychiatry: A National Call to Hold the Media and Government Accountable 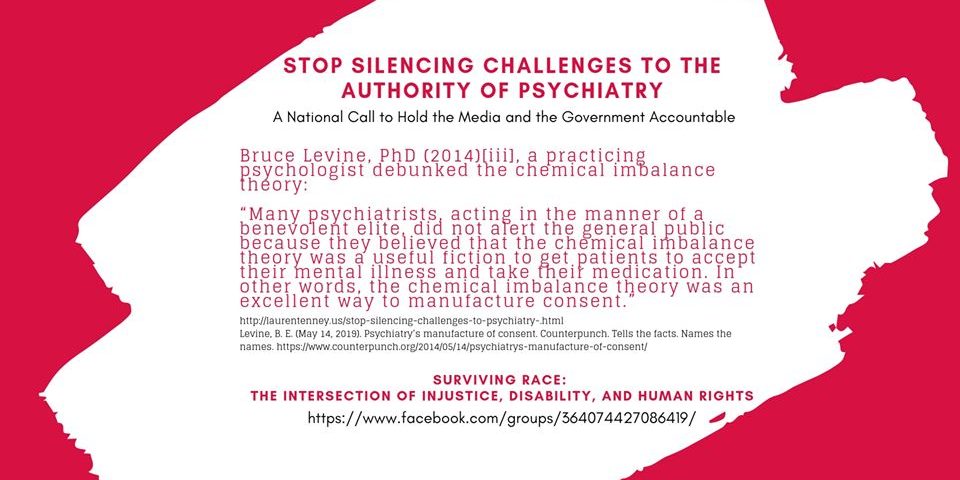 WHAT: This is a national call for people with psychiatric histories and their allies to speak out against the media silencing people for challenging the authority of psychiatry.

MindFreedom International and Surviving Race: The Intersection of Injustice, Disability, and Human Rights call for people to flood the media with calls and social media communications with several demands for basic standards when discussing psychiatry.

We have absolutely no affiliation to CCHR or Scientology.

First, the media and the government cannot silence people from speaking out against psychiatry.

Second, the media and the government must put out accurate information about the lack of science psychiatry rests on and the known potential injuries and death psychiatric practices, procedures, and products can and do cause.

Third, the media and the government cannot use acts of an individual or small group of people and extend those acts across an entire group of people that anyone, can be sorted based on subjective, non-biological assessments.

Fourth, the media and the government ought to expose the ways People of Color and people who are economically struggling are over-represented in state-sponsored court-ordered psychiatry and treatment over objection and under-represented in psychiatry that is voluntary in nature, with the degree of informed consent in participation unknown.[i]

Fifth, in the current US climate, white supremacy, white nationalism, and white violence are creating a culture of terror. The government ought to take responsibility for its direct incitation of recent traumatic events. Those in the media are also accountable for the ways in which they present the dehumanization and targeting of groups of people experiencing oppression.

We call to hold the media accountable for their messaging in the reporting of heinous and deliberate acts of hate.  Surviving Race works to support the voices of people with disabilities and protecting our communities from mentalism, racism, sexism, homophobia, transphobia, xenophobia, antisemitism, and islamophobia.

People who experience oppression are targets of psychiatry.

WHERE: Everywhere you see the truth about psychiatry being silenced.

Comments from Subject Matter Experts and Organizations included in this release:

Surviving Race: The Intersection of Disability, Injustice, and Human Rightshttps://www.facebook.com/groups/364074427086419/https://survivingrace2014.wixsite.com/platformdevelopment

WHY:  We have known for many years that people who are involved with psychiatry that speak out against having to comply with a psychiatrist’s orders are often treated more harshly than people who comply, by the psychiatrist and service agency they are attached.

People who reject the authority of psychiatry are more likely to have their rights violated, including forced compliance with psychiatric practices, products, and procedures. Kate Millett and Judi Chamberlin were two leaders of the human rights movements for people with psychiatric histories who are no longer with us. Their work was to speak out about the truth of psychiatry to those in power. Among other feminist and political and artistic works she created, Kate Millett, author of The Loony Bin Trip honed in on the lack of biological evidence psychiatry has, and the cover of benevolence it hides behind and nothing has changed: “Everybody believes in psychiatry; it’s supposed to be for our own good. Let psychiatry prove that anybody has an illness, and I’d concede, but there is no physical proof.”

Judi Chamberlin[ii] was an activist and author of many works including On Our Own.  In “Confessions of a Non-Compliant Mental Patient”, Chamberlin highlights the duress people subjected to psychiatry can experience due to fear of the power psychiatry holds over them: “I tried hard to be a good patient. I saw what happened to bad patients: they were the ones in the seclusion rooms, the ones who got sent to the worst wards, the ones who had been in the hospital for years, or who had come back again and again. . . I didn’t cry and scream and tell them that I hated them, and their hospital, and their drugs, and their diagnoses, even though that was what I was really feeling. I’d learned where that kind of thing got me. That’s how I ended up in the state hospital in the first place. I’d been a bad patient, and this was where it had gotten me.”

When asked, ‘what happens to people who speak out against psychiatry?’, sentiments expressed are universal and consistent with earlier research.  Jei Jei points out, “You are called either mentally ill, or a Scientologist.”

Joseph Alexander McNally explains the shaming people are subject to, “Why do you speak out against those who help you? You are not appreciative.”  Overheard on a psychiatric unit, at the act of an inmate challenging their treatment plan, those in power respond, “I think we’re going to have to keep an eye on things for another six months.  Let’s see where you are then, and maybe then we can talk about discharge.”   Anon suggests, “The overarching threat of force ensures my silence.”

Several people were unable to make public comments and that ought to say more than enough about the realities people involved with psychiatry experience. However, the ways in which people who speak out against psychiatry are silenced, are not limited to personal retribution, or retaliation in terms of being subjected to psychiatric treatment sometimes extends to the workplace.  For example, in conjunction with psychiatrists, A.R. reminds us, their employers sometimes forcibly institutionalize people. While institutionalized or living in the community, whether people are forced or voluntarily taking mind-altering psychiatric drugs, these drugs cause a variety of health problems, including tardive dyskinesia, diabetes, metabolic syndrome, a numbing of the brain and augmenting thinking, causing people to lose the will to live. Some people including pregnant women are coerced or outright forced to undergo brain damaging electric shock treatment (electroconvulsive treatment, ECT) requiring general anesthesia, muscle relaxers, pain killers, and going without eating for dozens of hours at a time, multiple times a week, for weeks or months.

Some people, especially children and people who are not verbal, are subjected to the use of electric skin shocks and other painful forms of behavior modification.  Lobotomies and brain implants, neurosurgery, is common.  People who have psychiatric histories who speak out against psychiatry are forcibly drugged, institutionalized for longer periods, and have freedoms restricted for questioning psychiatry. The life, liberty, and fortune of people subjected to court-ordered psychiatry are routinely under the control of The State. The silencing of people who speak out against psychiatry and pressuring them to retract their statements is not limited to those with psychiatric histories.

Bruce Levine, PhD (2014)[iii], a practicing psychologist debunked the chemical imbalance theory:  “Many psychiatrists, acting in the manner of a benevolent elite, did not alert the general public because they believed that the chemical imbalance theory was a useful fiction to get patients to accept their mental illness and take their medication. In other words, the chemical imbalance theory was an excellent way to manufacture consent.” In Levine’s recent[iv] article for TRUTHOUT based on an interview with Robert Whitaker, publisher of Mad in America and a journalist who for over two decades has been focusing on the field of psychiatry and exposed many of its questionable practices. Whitaker put forth a step-by-step explanation as to why the media will not hold psychiatry accountable, in part focusing on the “collapsed” story of a chemical imbalance. The point: “The media failed to question psychiatric association claims backed by Big Pharma advertising dollars”.

Bruce Levine responds:  “Cooper’s questioning of Williamson is a great example of what Whitaker discusses in the Truthout interview about the causes for mainstream media’s failure to report truths about psychiatry.” Even though Williamson repeatedly makes it clear that she does not oppose people’s use of antidepressants if they find them helpful, that’s not good enough for Cooper who is clearly upset by the idea the idea that antidepressants can numb or mask pain; and Cooper attacks Williamson for sending this ‘bad message’ to depressed people that might result in them not seeking treatment.

Even though Williamson clearly separates herself from Scientologists and Tom Cruise and his mocking of antidepressant users, Anderson repeatedly brings up the Church of Scientology and asks her if she would appoint someone from the Church of Scientology to be head of CDC if she were president. Even though Cooper agrees that increased use of antidepressant has not helped our increasing suicide rate, Cooper parrots psychiatry’s excuse that they are still in their “infancy” as to how to deal with “chemical depression.”

Ron Bassman, the Executive Director of MindFreedom International explains,  “During Anderson Cooper’s interview with Marianne Williamson, he continually questioned her point of view about psychiatric drugs without giving her a chance to explain herself.  Using the disingenuous preface to his remarks, “with all due respect”, her objection to the excessive marketing, ineffectiveness, and harm of psychiatric drugs was discredited by Mr. Cooper by insinuating that her beliefs were aligned with CCHR, an affiliate of Scientology (not quite saying that she was a Scientologist, but leaving hints for people to wonder about it).  It was clear from the interview that Anderson Cooper, like many biased mainstream members of the media do gotcha stories with closed minds when it comes to psychiatry while ignoring mounds of critical evidence.”

James B. (Jim) Gottstein, Esq., the President and CEO of the Law Project for Psychiatric Rights cautions, “The suppressed scientific research is very clear that not only are ‘anti-depressants’ no better than placebo for the vast majority who take them, often with serious negative physical effects, they dramatically increase the risk of suicide and homicide for people of all ages.  The book Medication Madness[v], by Dr. Peter Breggin may be the best compilation of this scientific proof.” In 2008, Doctor Breggin’s work detailed experiences of individuals involved with psychiatry and academic research, presenting the actual science of how and why these drugs are dangerous.

Doctor Paula Joan Caplan, PhD (1995[vi], 2015[vii]), having had an insider-view to the development of the Diagnostic and Statistical Manual (DSM) that holds all of the psychiatric diagnoses and their billing codes has for decades been calling attention to the fundamental fraud of psychiatric diagnosis since she learned first-hand how the supposed psychiatric assignments were created. The moral responsibility of all psychologists and psychiatrists is to hold the media and themselves accountable to the truth of the professions they have developed. Caplan suggests, “People’s lives and well-being are at stake in this debate, nothing less.  It’s not a surprise if you were confused by the interview on CNN. What is needed is to hear from someone who is an objective scientist, and knows what the research truly shows.” Caplan (2019)[viii] contends that the first harm people subjected to psychiatry experience is the diagnosis itself.

Surviving Race: The Intersection of Injustice, Disability, and Human Rights and MindFreedom International invites you to help us in our watch over the media and the government. In the current climate, where white supremacy and white nationalism is culminating in white violence and terror, targeting and dehumanizing people experiencing oppression. We vehemently oppose society placing more trust in the field of psychiatry and the creation of national ‘red flag’ databases of people assigned a psychiatric label. We reach out vigorously in support of those who may be experiencing trauma due to the ways the government and the media talk about people with psychiatric histories and iatrogenic damages they experience due to their involvement with psychiatry as well as other groups of people experiencing oppression.

August 10, 2019
GET INVOLVED!
Want to be among the first to hear directly from us about our work? Sign up now.
Go to Top