Mad Pride 2006 events around the world are especially extensive in locations in four nations: the west African nation of Ghana; Vancouver and Toronto, Canada; England; and Albany, New York, USA.

Mad Pride Rows With Many Oars! 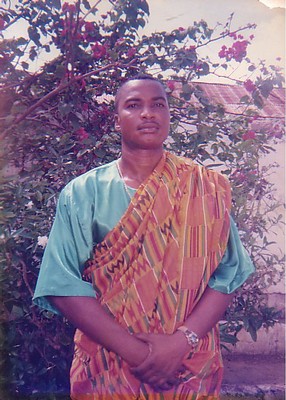 ACCRA, GHANA, AFRICA: MindFreedomGhana held a cultural event and symposium at Accra PsychiatricHospital. There was also a street march (pictured above in a photo byEmi Kane) and more. Dan Taylor (photo on right), who is the secretaryof MindFreedom Ghana announced, “Our Theme for our Mad Pride event is‘Free Minds At Ease.’ Our friends and relations have long beenstigmatized for living with or surviving psychosocial disabilities, andso we at MindFreedom Ghana will do what it takes to reverse this. Letall MindFreedom groups all over the world join in to accentuate ourcause in diverse forms!” You may email congratulations tomindfreedomghana@yahoo.co.uk.

PARIS, FRANCE: Oncemore, psychiatric survivors led by long-time MindFreedom activist AlainWache laid a wreath of remembrance at the actual Bastille on BastilleDay, 14 July. Two people labeled with psychiatric problems were amongthose freed in the original storming of the Bastille.

TORONTO, CANADA: The city of Torontoproclaimed July 14 Psychiatric Survivor Pride Day. A Mad Pride weekendin September includes an awards ceremony and reception and apresentation on “Community Treatment Orders,” which is forced druggingon an outpatient basis. There will also be several theater eventsincluding a new play, “The Places We Share” with Friendly SpikeTheater, a MindFreedom sponsor group, and a walking tour of the historyof psychiatric abuse in Toronto.

June 26, 2007
GET INVOLVED!
Want to be among the first to hear directly from us about our work? Sign up now.
Go to Top