Charting NAMI Web Use of “Biologically Based” 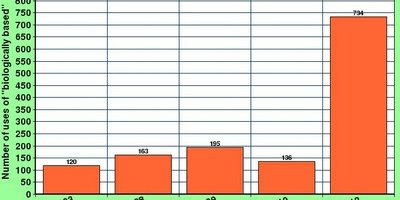 While more and more NAMI members support MindFreedom’s mission, a few NAMI leaders have worked over the decades to oppose campaigns for human rights and alternatives in mental health. One reason they may be creating this divisiveness in the mental health advocacy community is a bias toward a narrow “medical approach” that promotes a theory promoting psychiatric drugs over and above any other approaches. For nearly a decade, MindFreedom has held a count of NAMI’s web site to reveal this bias. [Updated August 2012]

Hmmmm… perhaps a doctor needs to be called. Or perhaps NAMI has been calling on a few too many doctors too often!

A search of the NAMI web site conducted by MindFreedom International shows the number of references on the NAMI web site to the phrase “biologically based” mental health problems is skyrocketing in 2012, over this past decade. 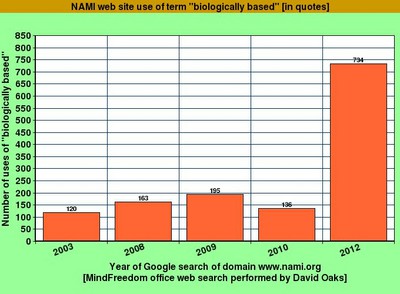 An informal survey conducted by MindFreedom International since 2003 (shown in the graph above) raises some interesting questions.

“NAMI: National Alliance on Mental Illness” has been one of the few major nonprofits in the mental health field that – even though it receives a great deal of funding from the psychiatric drug manufacturing industry – chose for decades not to disclose the exact amount, even to its own members.

US Senator Grassley held an investigation, and forced NAMI to disclose that more than half of their money had, for years, come secretly from psychiatric drug company donations. You can read about that US Senate investigation here.

Apparently this large amount of secret funding influences the philosophy of the organization. Or perhaps drug money tends to be attracted to a group that is promoting a drug-based approach.

Either way, there is a simple way to keep track of this bias.

Periodically MindFreedom uses the Google search engine to count the number of times the NAMI web site uses the term, in quotation marks:

Of course, this is an unscientific survey. For example, the use of all phrases would increase as a web site gets far larger, or decrease as old web pages are automatically removed.

However, the use of this particular phrase is at least a general indication of the orientation within NAMI toward a narrow medical model approach.

NAMI tends to use this phrase with a sense of certainty in describing mental health issues, as the “one true way,” even though there is no conclusive scientific evidence, and there are many other competing paradigms. This “medical model” approach is also promoted in countless NAMI printed brochures.

In reality, of course, there are many theories about mental and emotional problems and crisis, and there is no scientific data that one particular approach has been proven.

In fact, at the start of this web search in 2003, MindFreedom held a hunger strike on this very topic, called the “Fast for Freedom.” While the American Psychiatric Association was willing to engage in an extensive dialogue with hunger strikers about the lack of science behind ‘medical model’ claims, NAMI absolutely refused any official communications on the subject. Throughout the hunger strike, NAMI leaders created a special recorded message that said very little; when any phone inquiry was made, the caller was automatically referred to this.

You’ll see from the graph that in the year 2010, finally, NAMI’s use of the phrase apparently started to go down.

But unfortunately in 2012, it’s gone sharply up.

Perhaps this change in the use of the phrase is a function of an increased number of their web pages. However, one would hope NAMI would become aware of public concern about the influence of the millions of dollars of drug company money that has privately supported more than half of NAMI’s budget for the last few years.

NAMI ought to stop using the phrase “biologically based,” or at least explain that scientifically speaking this is one of a range of theories.

See the graph above for representation of the following data:

Number of times phrase “biologically based” appears during a Google search conducted by MindFreedom of the domain http://www.nami.org

For more info on NAMI on the MindFreedom web site click here:

If you want to ask NAMI in a civil but strong way about their amount of pharmaceutical industry funding you can phone:

We should all keep in mind that more and more NAMI members support a more inclusive and diverse approach. In fact, quite a number of NAMI members are also members and/or supporters of MindFreedom.

But these NAMI members tend to especially oppose the way that NAMI has been hijacked by an extreme and unscientific opposition to human rights, creating divisiveness in a mental health advocacy community that ought to be united.

These courageous NAMI members are continuing to make changes within NAMI. In the meantime, if a few NAMI extremists continue to promote an anti-rights agenda, please let them know that if our community is targeted we all speak out, together.

Don’t you think that NAMI’s positions need a “truth injection”?

There’s a simple flyer you can download on the MindFreedom web site to photocopy and hand out, busting myths about mental and emotional well being.

Wherever you see a brochure promoting the medical model of the mental health system – whether it’s a health center or library – demand that copies of the “Truth Injection” brochure be included, too! Let MindFreedom know if any public space refuses to include both sides of the story.

Perhaps by the 10th anniversary of the hunger strike in 2013, NAMI leaders may at least become open to civil and open dialogue about these scientific questions.

February 16, 2009
GET INVOLVED!
Want to be among the first to hear directly from us about our work? Sign up now.
Go to Top