Justin Dart is considered the “Father of the Americans With Disabilities Act,” and was also a key bridge builder in connecting the cross-disability movement, and the psychiatric survivor/mental health consumer movement. One of his last speeches was in front of the major annual meeting of the National Council on Independent Living (NCIL). 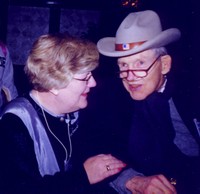 NO FORCED TREATMENT EVER Colleagues, I love you.

Americans, I love you. I appeal to you for solidarity in the American Dream. Let us keep our eyes on the prize; liberty and justice for all. Choices for all. No denial of treatment ever.

I congratulate David Oaks, Judi Chamberlin, Sally Zinman, and others who have cooperated to organize this meeting and each one of you here today to do the business of democracy.

I am honored to be here today with true patriots like Andy Imparato, Tom Olin, Laura Van Tosh, Jim Ward, Larry Plumlee and so many others.

Colleagues, our movement, democracy itself stands at an historic crossroads.

We have the knowledge, money, productivity and technology to create a life of profound quality for all 21st century Americans. At the same time we are challenged by powerful political and psychological forces that threaten the dream of democracy with retreat and defeat. They support forced treatment.

The Bush Administration intends to appoint psychiatrist Sally Satel to a key federal mental health advisory role. This American Enterprise Institute psychiatrist opposes, mocks and demeans the very idea of consumer/survivor organizing for self-determination and freedom. She entitles Chapter Two of her recent book, “Inmates Take Over the Asylums.”

How can we defeat these overwhelming forces with their billion dollar lobbies and ad agency campaigns? We can beat the odds the same way our founding mothers and fathers did.

1. We can give up life as usual and become passionate, single -minded, 365-day advocates for the American dream.

2. We can give up politics as usual and devote every possible minute to a passionate politics that will elect friends of democracy in the elections of 2002, 2004 and beyond. We must politic as if our lives depended on it. Because, believe me, they do.

I propose that we of the disability communities unite with all who love justice to lead a revolution of empowerment.

A revolution, to create a culture that will empower every single individual including all people with psychiatric disabilities, to live his or her God given potential for self determination, productivity and quality of life.

We choose our own doctors and medication. We choose the places of care. No denial of treatment ever.

Colleagues, I love you so much. United in love and passion for the dream, we shall overcome.

NO FORCED TREATMENT EVER!

NO FORCED TREATMENT, EVER!
– end –
(Photo: Rae Unzicker (on left) and Justin Dart. Rae was a psychiatric survivor activist who was a bridge-builder to cross-disability movement. The photo is not from the 2002 event.)
October 6, 2011
GET INVOLVED!
Want to be among the first to hear directly from us about our work? Sign up now.
Go to Top