A newspaper from the disputed territory of Kashmir reports that “Médecins Sans Frontières” (MSF) also called Doctors without Borders is donating an electroshock machine to this very poor region. MindFreedom International expresses its opposition.

MindFreedom International notes that the organization “Médecins Sans Frontières” (MSF), also called Doctors without Borders, is donating an electroshock machine to a very poor region of the world, Kashmir.

David W. Oaks, Director of MindFreedom International said, “In the context of extreme human rights violations found with the use of electroshock, especially in poor and developing countries, MindFreedom calls on Doctors without Borders to halt donations of electroshock devices, and begin dialogue with organizations representing survivors of psychiatric human rights violations.” 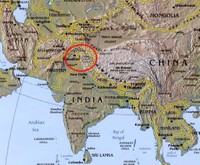 A statement of MSF issued here today said that the organization has been providing quality mental health care services in Kashmir since 2001 and currently has counselling facilities in five districts of Kashmir valley.Principal Secretary to the Chief Minister Omar Abdullah, Khurshid Ganai will formally inaugurate this new facility in Jammu and Kashmir during a small ceremony on Friday 27 February at the Government Hospital for Psychiatric Diseases.

ECT has been used for more than 50 years, yet it remains one of the most controversial treatments used in psychiatry, the statement said.It is administered to patients with one or more of several psychiatric problems like severe, life-threatening depression, mania and schizophrenia.ECT involves placing an electrical pulse to the patient’s head to cause a carefully controlled fit or seizure and its value for certain patients with psychiatric illnesses has been well documented in the medical press.Direct ECT, which is administered without anaesthesia can cause epilepsy-like seizures in some patients.

The side effects of this can be serious and can include vertebral/thoracic fractures, dislocation of various joints, muscle or ligament tears, cardiac arrhythmias and fluid secretion into the respiratory tract.

Due to these serious potential side effects, there is also a high degree of fear and anxiety associated with the therapy.

For this reason there is damaging stigma against current ECT practices in Kashmir, which could otherwise be very effective.

The equipment that Médecins Sans Frontières has donated allows for ECT to be administered under general anaesthesia.

This relaxes muscles and generally negates the serious side effects of ECT without anaesthesia. This allows for the full therapy course to be completed and ensures that the positive effects of ECT are maximized. It also reduces the fear and anxiety among patients and will lead to reduced stigma of the use of such therapy for patients with psychiatric illnesses over time.

As a part of Médecins Sans Fontières’ work to advocate for better and improved patient care in the psychiatric hospital Srinagar, MSF is very pleased to see the Modified ECT in place. We are confident that such collaboration with the Ministry of Health services will also contribute towards reducing the taboo associated with the problems of mental health in Kashmir.

To e-mail a civil comment to MSF asking for a halt of electroshock machine donations, and the beginning of dialogue with psychiatric survivor organizations, e-mail to: webmaster@msf.org

February 26, 2009
GET INVOLVED!
Want to be among the first to hear directly from us about our work? Sign up now.
Go to Top