The Manifesto of a Noncompliant Mental Patient 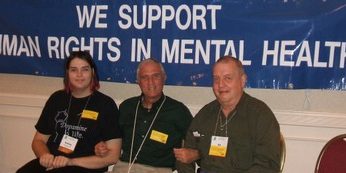 This excellent essay by psychiatric survivor member of MindFreedom International was first published in the Canadian publication Open Minds Quarterly. The author Aubrey Ellen Shomo is shown at left in below photo helping to staff the MindFreedom ‘free space’ at Alternatives 2007. Aubrey encourages you to re-distribute this far and wide saying, “spread it to the wind.”

The Manifesto of a Noncompliant Mental Patient

I see it everywhere: People with mental illness need medication.  It sounds reasonable.

Today, there are even political organizations that seek to make it easy to force a person to take it.

It’seasy to look at another and assume things like that.  It’s human. After all, it’s compassionate to help someone who isn’t able to ask forhelp, right?  They’ll thank you in the long run, won’t they?

Noone asks why their child, or sibling or friend refuses to take theirmeds.  Why bother?  It’s an illness.  It’s meaningless.  The doctorssay so.  They know these things.

Have you ever questioned the logic of the phrase “She wouldn’t be refusing medication if she wasn’t ill”?

I am a noncompliant mental patient.  I have been for years.  I beg you.  Ask why.

Look into my eyes and see me.  Try to understand where I’m coming from.  Even a crazy person has a human will.

I am someone’s sibling, someone’s child, and someone’s friend.  I could be yours.

I’vebeen told more times than I can count that I won’t make it withoutmedication.  I’ve been told that I have a chemical imbalance.  Mybrain’s broken.  I need it.

If I refuse, it’s the side effects. They can treat them with more medication.  If it isn’t that I lackinsight.  I don’t know I’m sick.

Why would I possibly want to stop?  How could I wish to do so?  Let me ask you:  Have you ever taken these drugs?

Theycall it anti-psychotic medication.  It sounds good enough, but did youknow these drugs are also called major tranquilizers?

They speak of side effects, but do you know what it feels like to have them?  Can you read that on the label?  On my label?

What’s that?  You learned all about this in medical school?

Canyou learn what it is to be in love from reading a medical description? Heart rate, neurotransmitters, behavior patterns.  Three criteria outof five.

Can human experience be described in such simpleterms?  I bet you don’t think yours can.  Why, then, do you insist ondescribing mine?

I know how major tranquilizers feel.  I’ve had to.

Theychange a person.  The vigor of human experience fades to shades ofgray.  Life becomes dull, boring, long.  Creativity slips intonothingness.  The very human spirit is dulled.  You can go from therapture of being alive to wondering if you even are.

They willmake you calm.  They will make you behave.  They might even help withyour problems, but they can dampen what really matters – what makes youalive.

“She prefers her mania – her madness.  It’s a symptom of the disease.”

How can you say what matters to me?  Is that your right?

And they wonder why I don’t trust them. How could I be hesitant, even bitter?

They might be right, but all I ever wanted is to make my own choices.  I’ve only wanted to scream, “What about how I feel?!”

I am a noncompliant mental patient.  Hear my voice.

Acancer patient can refuse chemotherapy.  A religious person can chooseto trust God over penicillin.  A doctor would call both irrational, butacquiesce.  All I ask is the same right.

“She’ll decompensate without it.  It’s the only thing keeping her even remotely sane.”

I stopped all my medication twice.  I was hoping once would be enough.

Thefirst time, I failed.  I lost it.  They were right: I went crazy.  Iwas strongly encouraged to take my meds.  It was a fight I knew I wouldnot win.

“Patient has been compliant – though hostile.”

Afaçade of normalcy regained.  High functioning.  Working, going toschool, socializing.  All the things you’re supposed to do.  All sohollow.  The spark was gone.

“The medication is effective.”

But the drugs felt the same.  So, I stopped again.  Lots of people do.

“Compliance is a major problem in the treatment of mental illness.”

Iwas told that I’d need medication forever.  The facts spoke clearly.  Iwas mentally ill.  As long as I took my medication, I would be fine. Without it, I was doomed.  Why did I want to stop?

I told them how it feels, but it didn’t matter.  I told them I would recover through force of will alone.

So, I told them I didn’t believe I was sick.

Intruth I was terrified.  I believed I was insane, I had failed before,and I wasn’t sure I could pull it off on my own.  After all, the factswere clear – no one does.

Later I learned that many have.  No one talks about them.

John Nash never took medication again – it was key in his recovery.  They left that out of the movie.

There are many others who were told no one recovers – told that they would be ill forever – but who proved them wrong.

I am a noncompliant mental patient, yet no one would try to hand me a pill today.

Toget here, I had to ignore good medical advice.  I had to have poorinsight and bad judgment.  Without it, I would never have achieved whatI have in life.

I often think about people who may havesucceeded in stopping their medication, if only they had the necessarysupport instead of assurances of failure.  I wonder how many more Ishould be able to name.

I wonder why so few people speak of the validity of the desire to not be medicated.  Even a crazy person has a human will.

Thiswork is Copyright © 2006 Aubrey Ellen Shomo.  It was first published inthe Spring 2007 issue of Open Minds Quarterly.  It may be reproduced,copied, or reprinted in any medium now existing or invented in thefuture, so long as it is reproduced in its entirety, including thiscopyright statement, and so long as it bears attribution to the author,Aubrey Ellen Shomo. Spread it to the wind.

June 10, 2007
GET INVOLVED!
Want to be among the first to hear directly from us about our work? Sign up now.
Go to Top