May 2008 Protests of Electroshock

MindFreedom Ireland in Cork, Ireland on 3 May 2008 protesting electroshock.

The reports were compiled by Sue Clark, who is chair of the MindFreedom ZAPBACK Committee to end electroshock.

Update: A photo is now on this web page for each of the three protests.

MindFreedom Lane County will also include protest of electroshock in their 17 May 2008 skit protest The Normathon.

The reports begin with Ottawa, followed by a brief report from Montreal, and then from Cork, Ireland. 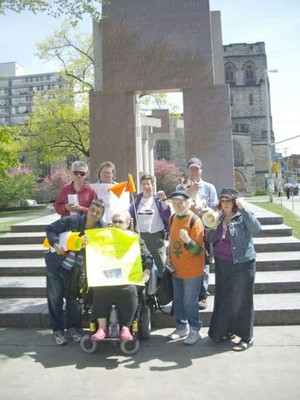 Ottawa protests electroshock on 11 May 2008

Here are two articles re the ECT protest yesterday in Ottawa. The first one is from the CBC national news. There was a radio show yesterday on CBC radio at 7:30 p.m. I was told and there was a whole show on ECT. I will try to get the transcript. The first article from the CBC they put in Dr. Peter Breggin’s’ name wrong, and put in “Paul Breggin”.

The second article from CTV.ca said in the article “patients” I have free of psychiatry since 1990 and have not been a patient since then.

The ECT protest was also covered by CFRA radio, CJOH TV news in Ottawa, and A channel News in Ottawa. The CBC had a whole story on ECT on CBC radio on Sunday at 7:30 p.m. and I did not hear the show. If anyone did, please let me know.

We will be holding the ECT protest every year on Mother’s Day on Parliament Hill in Ottawa.

Thank to all who participated in this ECT protest in Ottawa: Steven Wittenberg, my husband, Don Weitz, Graeme Bacque, Jane Scharf, Marco, Phillip and Jen, Cristian and Francois, Elisabeth Ziegeler and Jay, Debbie and Jennifer, Michael, Barbara Mainguy, Karen Dawe, and to the others who were there and to all the people who sent statements and encouragement to to the event: Mary Maddock from Mindfreedom Ireland, Helene Grandbois from Montreal, Dr. Bonnie Burstow from Toronto, Leonard Roy Frank from San Francisco, and Dr. John Breeding from Texas, and to David Oaks and his staff for their support and encouragement.

I will be on a radio show today on CHRY radio 105.5 at 5:30 p.m. which is in Toronto, Ontario, Canada
talking about the ECT protest yesterday and other antipsychiatry issues.

(you can make comments at this link) – Sue

Despite protests calling for a ban on the treatment, electroshock therapy is frequently used by Canadian psychiatrists to treat severe depression.

The Canadian Institute for Health Information (CIHI) estimates that last year, the procedure, which dates back to 1938 and involves passing electrical currents though the brain to trigger seizures, was used more than 15,000 times in the country.

The figure has remained virtually unchanged since 2002, CIHI says, showing that the popularity of the procedure remains strong.

A report in the Canadian Medical Association Journal last week shows the procedure is commonly used to treat drug-resistant depression in seniors.

However, critics of the procedure believe its usage should be stopped, and it is a painful procedure that leads to brain damage.

On Sunday, about a dozen protesters rallied in Ottawa, calling for a ban of the procedure.

Protest organizer Sue Clark-Wittenberg had electroconvulsive therapy (ECT) 35 years ago, and says it has kept her from getting an education and a good job.

Dr. Nizar Ladha, a psychiatrist based in St. John’s, has been using ECT for three decades. He says the procedure does induce seizures, but they’re not painful and don’t cause convulsions.

“As an effective and lifesaving treatment, it rates right up there with the discovery of penicillin,” he told CBC News.

Ladha says he has seen ECT help fight depression and prevent many suicides.

But Dr. Paul Breggin, a New York-based psychiatrist, is in a minority of psychiatrists who says the procedure should be banned.

“We’re treating human beings as if they are a very crude machine which can be battered back into shape.”

Still, Dr. David Goldbloom, a psychiatrist with the Centre for Addiction and Mental Health in Toronto, predicts it will become even more popular, having survived numerous calls to ban it and two provincial inquiries.

“Each time the conclusion is the same — that the balance of evidence supports retaining this to try to help people with depression.”

Past patients of electroshock therapy took to Parliament Hill today, requesting a ban on what they say is torture.

Also known as electroconvulsive therapy (ECT), the American PsychiatricAssociation and the Canadian Psychiatric Association have deemed ECT tobe safe and not cause brain damage.

The protesters claimed ECT is barbaric and inhumane.

Wittenberg said she was subjected to ECT 25 years ago. Now, she claimsshe suffers from memory loss and difficulty learning. Wittenberg andother patients want the Canadian Government to ban what is considered atherapeutic practice.

“The Canadian Psychiatric Association says on their website thatelectroshock therapy is safe. That is not true, look at me,” Wittenbergsaid.

Wittenberg claims 14,000 people in Ontario are subjected to electroshock therapy every year.

According to the Canadian Psychiatric Association, ECT is effective inthe treatment of patients with major depression, delusional depression,bipolar disorder, schizophrenia and catatonia.
________________ 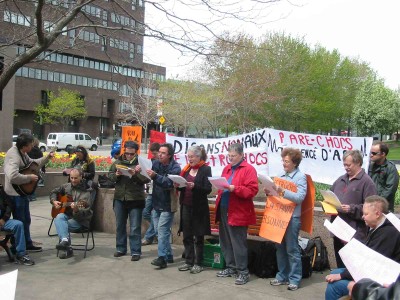 Our protest was real success. About 50 persons were there. We had our choir perform two times and chant our slogans.

We had a bannière with “Disons non aux électrochocs Urgence d’agir”.

I made two times a speach one more general on my motivations to make ECT banned and a translation I made of Sue testimony that she send me.

Two other speakers made speeches. Two TVs station were there TVA and Radio-Canada who made a very good report of the situation about ECT not just a report from the protest but also they documented the fact that our Ministry of Health did nothing from the Banken report recommendation 5 years after the report.

Nobody was interviewed to counterfact our statements. The Ministry of Health was interviewed and could just say they do nothing to monitor or to tcheck about the situation of ECT and the women and elderly that were shocked. On the web site of both Radio-Canada and TVA our statement are well put into evidence. We also had interviews for a radio program that will be on the air on next friday night at 8 o’clock cannot say the result of this. We will see.

In general the protest was energizing and everybody who was there will sing our songs with us and say our slogans. Really a very exciting event.

As Mary said we shall overcome
Take care
Love
Hélène

Members of MindFreedom Ireland, the organisation which campaigns for human rights in the mental health system, protested against the use of electro shock as a ‘treatment’ both in our Irish hospitals and worldwide.

It took place outside the G.P.O. Oliver Plunket St. Cork, Ireland between 1.p.m. and 4.p.m.

Many members of the public expressed their own shock! that this barbaric practice was still performed both worldwide and in our Irish hospitals today ‘in the name of help.’

They were more outraged that it could even be legally forced on vulnerable people.

Many of them signed a petition to abolish the practice.

Four electro shock survivors from Cork spoke out and confirmed that it did indeed cause brain damage.

The protest was part of a worldwide demonstration in conjunction with Mother’s Day in Canada, to highlight the fact that two thirds of the recipients of shock are women. Messages of solidarity from Canada were read out.

On the same day MindFreedom Ireland celebrated the ratification of the UN treaty on the rights of people with disabilities (this importantly includes people with psycho/social disabilities) which hopefully will stop forceful ‘treatments’ used in present day psychiatry including electro shock.

Mary Maddock was the focus of an article about electroshock in in a major Irish newspaper, to read the article click here.

· IS AN ABUSE OF HUMAN RIGHTS

· CAN BE LEGALLY FORCED ON PEOPLE AGAINST THEIR WILL

· TWO THIRDS OF SHOCK VICTIMS ARE WOMEN – MOTHERS AND
GRANDMOTHERS

May 4, 2008
GET INVOLVED!
Want to be among the first to hear directly from us about our work? Sign up now.
Go to Top