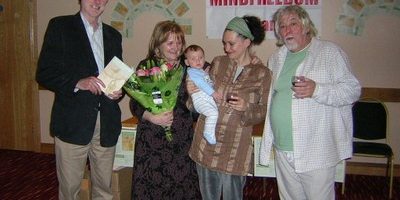 Mary and Jim Maddock from MindFreedom Ireland attended the memorial service for Terence McLaughlin, the editor of Asylum magazine. Here is their report. Jim and Mary are in the below photo (on left) and Terence, who helped publish their book, is celebrating on the right. 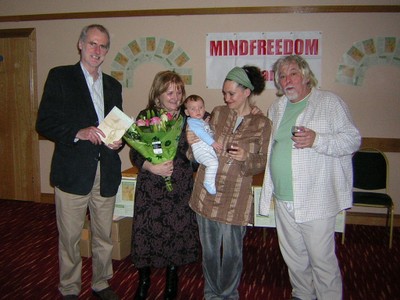 Jim and I have just returned from Manchester where we joined in one of the most meaningful services in remembrance of Terence for the last time. I first met Terence at an INTAR meeting in Kilarney and our spirits united immediately.

We both loved music and we shared the rhythm of life then for a short time.

It was then I told Terence we were writing our book and he took an instant interest.

Yesterday, I was amazed to find out what an accomplished musician Terence was himself. The service began with a Flamenco performed by him on his guitar. Later we heard his beautiful and poignant rendering of Bob Dylan’s ‘Restless Farewell’. While we all listened spellbound, there was hardly a dry eye among his family and friends. The writings of Kahil Gibran have always been my bible and I was not surprised to find out that Julie his partner read his heartfelt words on ‘love’ so lovingly and sincerely at his last farewell also. “Love one another, but make not a bond of love. Let it rather be a moving sea between the shores of your souls”.

Terence has six beautiful children Mano, Juanita, Roisin, Mia, Grania and Carmen and they were all there to give him tribute.

He was a man loved and revered by many and everyone was struck by his integrity, gentleness, modesty, loving nature and most of all his sense of, his permanent wish and his constant action for social justice. It was fitting that we all sang ‘The Internationale’ led by the radical English psychiatrist Phil Thomas:

And the last fight let us face.

He came to visit us in Cork for the first launch of our book Soul Survivor—A Personal Encounter with Psychiatry last December 2006 and because of weather conditions he stayed with us a little while longer that was intended. It was because of this that he talked to David Oaks on Skype for the first time. His aspiration was that Asylum and MindFreedom International would connect and work together for the nonviolent revolution in the mental health system.

Now that I had come to know both David and Terence I knew this was a logical conclusion and I was delighted they were getting to know each other. It is a pity their paths led together for such a short time but it would be his firm wish that this bond should remain even stronger now he is no longer with us in bodily form.

Your time with us was all too short but our lives have been enriched by you Terence McLaughlin.

Thank you for all your dedicated and inspirational work over the years and may we have the courage and strength to carry it on.

We loved you, Terry.

September 12, 2007
GET INVOLVED!
Want to be among the first to hear directly from us about our work? Sign up now.
Go to Top