UN celebrates and so should we 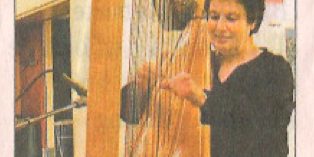 The Toronto Star covered the United Nations celebration of the launch of a binding international treaty for human rights and disability. Pictured plyaing the harp at the event was Myra Kovary, a long-time activist member of both MindFreedom’s United Nations team and World Network of Users and Survivors of Psychiatry.

UN celebrates and so should we 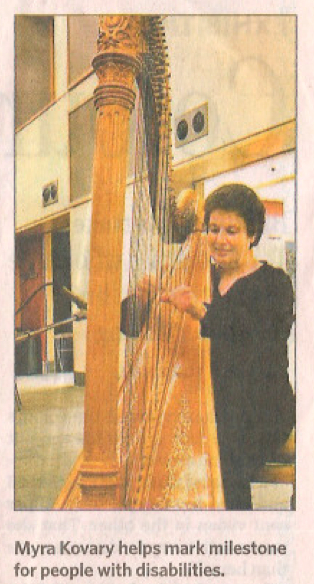 Speed is not exactly the first thing anyone thinks of when it comes to weighty international organizations but you cannot accuse the United Nations of dilly-dallying on disability rights.

On Monday, to the accompaniment of harpist Myra Kovary at its New York headquarters, the UN celebrated swinging into action with its Convention on the Rights of Persons with Disabilities.

Adopted in December 2006, the agreement to promote inclusion, dignity and independence was one of the fastest treaties ever negotiated at the UN’s august if unwieldy General Assembly. Signed by 129 countries, and ratified by 29 at last count, it came into force May 3.

Canada is not only among the signatories. A team of hard-working advocates from this country, including Steve Estey, chair of the international development committee of the Council for Canadians with Disabilities, was among those credited with helping to expedite things.

This month in Ottawa, the House of Commons unanimously passed a motion calling for ratification of the agreement following consultations with provincial and territorial governments. And therein lies the next round of hard work.

Translating the UN treaty into meaningful change for the more than 4 million people with disabilities in this country means getting one central government, 10 provinces and three territories on the same page, with input from the people whose rights are at stake.

Disability communities from sea to sea are ready to help. So let’s get the show on the road.

As UN Secretary-General Ban Ki-moon put it at this week’s celebrations, breathing life into the agreement, turning it into “real victories on the ground” is the true challenge.

“We must address the glaring inequalities experienced by persons with disabilities,” the secretary-general said. “We must counter discrimination and prejudice. We must deliver development that is truly for all.”

Needless to say, if the world were a perfect place, people who move or communicate or process information in diverse ways would automatically be included as adding to the richness of any community.

The rights of people with disabilities should be protected under the world’s seven existing core human rights treaties, the UN points out. “In reality, their rights have largely been unaddressed and frequently violated,” leading to “discrimination in all aspects of society,” including the workplace, education and government social programs, it says.

The new Convention does not actually create any new rights but ensures that the rights of persons with disabilities will be promoted, protected and ensured. Countries that ratify it must enact laws and undertake other measures to improve disability rights. They also must “abolish legislation, customs and practices that discriminate against persons with disabilities.”

As Sha Zukang, United Nations under-secretary general for economic and social affairs, told celebrants, the agreement “is not just the first comprehensive human rights treaty of the 21st century, it has a very strong development dimension.”

At the Council of Canadians with Disabilities, chair Marie White issued a statement saying: “This is a very proud day…because this international convention adopts an approach that has been advocated by people with disabilities for the last 30 years.

“Unlike some previous UN documents, (it) does not define people with disabilities as a constituency in need of medical care or social protection.”

Instead, White said, it “approaches people with disabilities as full citizens with rights who, as free and equal members of society, make decisions for their lives based on their free and informed consent.

“The Convention gives universal recognition to the dignity of persons with disabilities.”

May 18, 2008
GET INVOLVED!
Want to be among the first to hear directly from us about our work? Sign up now.
Go to Top