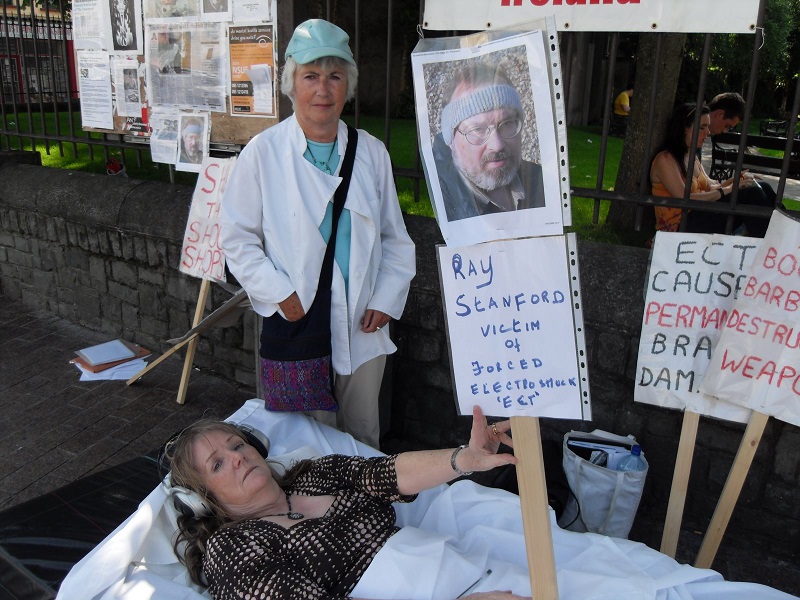 The annual Shock Protests take place around the world. Started by electroshock survivor and MindFreedom Ireland co-founder, Mary Maddock, the protest is held against the violation of human rights in electro-shock therapy (ECT). This is held on Mother’s Day every year. At the protest, survivors of ECT spoke out against the treatment, testifying to their severe memory loss and cognitive dysfunction that they experienced from ECT. Activists emphasized that ECT was performed on twice as many women as men, the oldest woman being 92 years old.

According to the director of MindFreedom Ireland, Mary Maddock, said, “Electro-shock is a barbaric assault on the individual.  As a young mother after the birth of my daughter, I was subjected to 16 sessions of it and suffered permanent memory loss as a result. I have spoken to many others who have received it both in Ireland and abroad and all have received permanent brain damage.  MindFreedom Ireland is calling for the total abolition of electro shock.”

Details from the 2009 protest which featured a ‘mock shock’ in the streets of Cork, Ireland.

Details from MindFreedom’s shock protests in 2007.

On May 13, 2007, a similar ECT protest was held in Queen’s Park, Toronto, Canada. The participant count numbered to 140 individuals.

On the same day, another ECT protest was held at the Metro station in Montreal, Canada, with about 40 individual participants. There, a petition was signed against the treatment and Celine Cyr reported on the abuse of electroshock on women, mothers and grand-mothers. According to Hélène Grandbois, many onlookers were surprised to discover that ECT still exists today.