Shield Member, Siddharta Fisher to be released from Western State Hospital! Thank you for your calls, emails, letters! 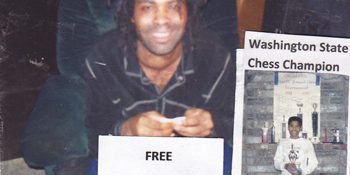 Reintegrating at last!! MFI was informed that page was in need of an update! Siddhartha’s discharge and integration back into the community did not go as smoothly as we had hoped (due to discrimination against Sidd’s family members and lack of housing options for psychiatric survivors) but she is now safely living in the community. Sidd’s mother gives a detailed description of her latest reintegration journey HERE

MFI has just learned that Shield member, Siddharta “Sidd” Fisher will be released from Western State hospital in Tacoma, Washington on October 13.

There is no need to take further action onbehalf of Shield member Siddharta Fisher. MFI has just learned from Cindi Fisher, her mother, that Sidd will be released on October 13! Cindi wants to thank all of you who took action on behalf of Sidd. MFI asks you to suspend further actions for now. MFI will continue to communicate with Cindi to ensure that Sidd’s new discharge plan is executed, as promised by Western State staff and that Sidd receives all of the support she deserves to live as independently as possibly, while healing from the trauma of years of incarceration and psychiatric abuse.

As Cindi points, this is not the time to reflect on the harm done to Sidd and others at Western State. This is the time for celebration.

“Your advocacy, your research, your suggestions, your presence and prayers, your emails to me and them, your calls, your  just hanging in there with us, were all critical to get us to this point of the Victory Dance!

Siddharta is ecstatic, and has begun making plans! And Sidd’s “treatment team” has finally agreed, once again, to our original July 1, plan of discharge into the community.  I am cautiously excited, but Sidd’s joy is contagious, and so mine grows!

There is much more that calls to be spoken to, but now is not the time for that kind of reality check.

If you haven’t registered for the FREE Summit, please consider doing  so and please personally talk and encourage a friend or family member to zoom in as well.

Day 1 is THIS SUNDAY from (9:00-12:00 PDT!
Even if you can’t attend that day, take a look!
https://www.alternatives-conference.org/peerrespitesoteriasummitate

With Love and Gratitude,
Cindi

Thank you Thank you, Thank You,f or your support!”

Cindy writes about Sidd: “As a Black, Trans, Disabled person, unlawfully confined in a decertified, defunded hosptital, this truly increases her vulnerability to harm”

The good news is that Cindi Fisher continues to fiercely advocate for Sidd’s immediate discharge in accordance with the Olmstead ruling. See below for actions you can take.

The bad news is that the previous plans that Cindi put together for Sidd’s release have been officially dismissed by the discharge planning team. If you recall, at the demand of Sidd’s psychiatrist, Western State took Sidd off the discharge list, to enable a social worker to report to a judge during a recommitment hearing that Sidd was ineligible for the outside services (the ones that Cindi had helped Sidd enroll in) so Sidd was recommitted because there was no discharge plan!

Then capricously, WS staff put her back on the disharge list, only days later. Administratively, this shenanigan had the effect of  undoing months of work by Cindy and Sidd’s advocates to create a independent living plan for Sidd which had Sidd’s buy-in

The discharge planning team is now recommending that Sidd live in an adult care home. As Cindi pointed out, Sidd’s last experience at an adult care home was negative and short-lived, plus it can take up to a year for an opening at one of these adult care homes, essentially dooming Sidd to remain locked up at Western State indefinitely.

Other bad news is that Cindi has been banned from visiting Sidd, her adult child, due to a disagreement involving the mask-wearing policies enforced by Western State. This led to a misunderstanding in which Western State staff accused Cindi of shouting and being combative, and creating safety/security concerns MFI staff has known Cindy for years and has never witnessed her exhibiting any behavior that could be construed as violent or threatening. MFI strongly opposes this characterization of Cindi’s character.

Despite a ban order by Western State, Cindi will continue to hold vigils in front of Western State hospital, noting that it is public property.

Join the advocacy for

or if you have more time

Cindi thinks your letters are making a difference!

Several days ago, we put out a call for help locating the contact information for Siddhartha’s ‘treatment’ team. Thanks to a devoted Shield volunteer, we have located some of that information. Please scroll down to actions to view contact these people for Siddhartha’s immediate discharge and don’t forget that you can post your actions in the comments section below.

If you have already taken action based on the original alert dated 7/27 (see below) THANK YOU! If you haven’t taken action to date, or you are new to this Shield campaign, please scroll down to read the original alert and join others by taking action TODAY. You can share Siddharta’s alert with others by going to the alert on MFI’s website  HERE  and sharing the link.

When you take a new action, whether you receive a response or not, please post a copy of your letter/email publicly in the comments section on Sid’s alert HERE

Scroll down to view actions you can take for Siddharta! 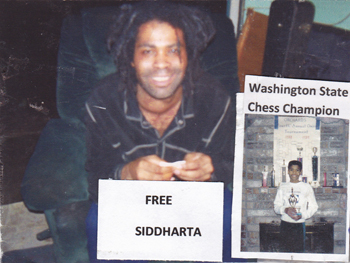 Send an email to every legislator in Washington with a single messae, compliments Jim Gottstein. Use this email washleg@networkagainstpsychiatricassault.org.

Contact the following individuals who are on Siddharta’s ‘treatment’ team who have the power to recommend his immediate discharge:

Psychologist on Sid’s ‘treatment’ team if you can find her contact information, please send it to office@mindfreedom.org

Consider joining Cindi by fasting for an hour, a day, or giving up something you enjoy for a time.  Write the item you are giving up and the time period on a paper plate and send a picture to office@mindfreedom.org so we can circulate. 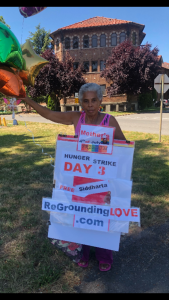 “Hidden in plain sight. People have no idea how corrupt the Washington mental health system is!” These are the words of Cindi Fisher whose adult child who continues to be imprisoned in Western State Hospital, despite his discharge readiness.

Cindi ended her fast yesterday but she will continue to fast every Tuesday and protest in front of Western State Hospital on Tuesdays until Sid is discharged. She asks for your continued support calling the hospital and officials in the state of Washington (see phone numbers below) to demand Sid’s release.

In this video, recorded live at her protest yesterday HERE She asks that you join her by fasting as a statement of support for Sid and all of the other people who are locked up in Western State hospital.  She asks that you take an empty plate and write down what amount of time you would be willing to fast for Siddharta whether it is an hour or a day or even longer and send a selfie of your plate to Cindi at cindipacha@gmail.com.

Watch Cindi Fisher, Original alert 7/21/21Sidd’s mother, Cindi Fisher, requested that Sidd’s Shield be activated to help her win her freedom. She has been held against her will  for over a year while being forcibly drugged. On the eve of what supposed to be the day of her discharge, she was capriciously taken off the discharge list. Cindi has been conducting a hunger strike in solidarity with Sidd ever since.

You may recall that Western State Hospital was de-certified by the state of Washington and de-funded by Medicaid to the tune of $53 million. Why then, are there hundreds of people, like Sidd still locked up there in violation of the Olmstead Ruling which explicitly states that people should be allowed to live in the least restrictive setting possible within their own communities?

Sidd and her mother both ask for your help demanding Sidd’s release from this unsafe, unhealthy environment..

You can read about Cindi’s solidarity protest HERE

Below is a summary of Sidd’s year-long ordeal and if you scroll down to the bottom of this page you can read ACTIONS to take.

A Mad In America article HERE describes Cindi’s journey from “Compliance to Activism”.

For those of you who have followed Siddharta’s story for many years, Sidd has slowly been letting her mother know for several years that her gender identity is female. Previous articles use he/him pronouns. Today, her mother uses she/her pronouns.

Cindi’s journey reveals the structural inequalities faced by black and gender non-conforming people like Siddharta who experience increased vulnerability to mental health crises, less access to quality treatment, and the least access to resources to continue care after discharge. Black patients receive more stigmatizing diagnoses for the same symptoms, higher doses of medication, and a higher likelihood of going to jail rather than a hospital for the same actions. *

What makes this situation so concerning to MindFreedom is that Sidd was on the discharge list since April and was signed up to participate in several outpatient programs in Washington to help her live independently in the community in accordance with the Olmstead ruling. Sidd is eligible to receive housing support and other services, partly paid for from a settlement from The Trueblood v. DSHS lawsuit filed in 2014 which challenged unconstitutional delays in competency evaluation and restoration services for people detained in jails.

Sidd was in line to return to her community with a lot of support.

On Tuesday, June 29, the Director of Social Work, Candace Yi, called Cindi to instruct her on the exact place and time to pick Sidd up.

On Wednesday, less than 24 hours before Sidd’s discharge, Cindi received a phone call from administrators saying that Dr. Zisken, Sidd’s treatment team doctor, and the Western State Hospital medical director not only blocked Sidd’s discharge, but took her completely off the discharge list, without any reference of harm to self or others, or prior warning.

Not only did this devastate Sidd, it made her instantly ineligible to receive the transitional housing services and peer delivered services she was set to receive after discharge–in effect, all of the planning for Sidd that took months and months to put together just went up in smoke.

Sidd needs our help to protest this injustice!

ACTIONS YOU CAN TAKE

Leave the message with the answering operator …

“Tell Dr. Waiblinger to Free Siddharta Immediately with NO Restrictions!”