Introducing Voices for Choices: a new video series from MindFreedom 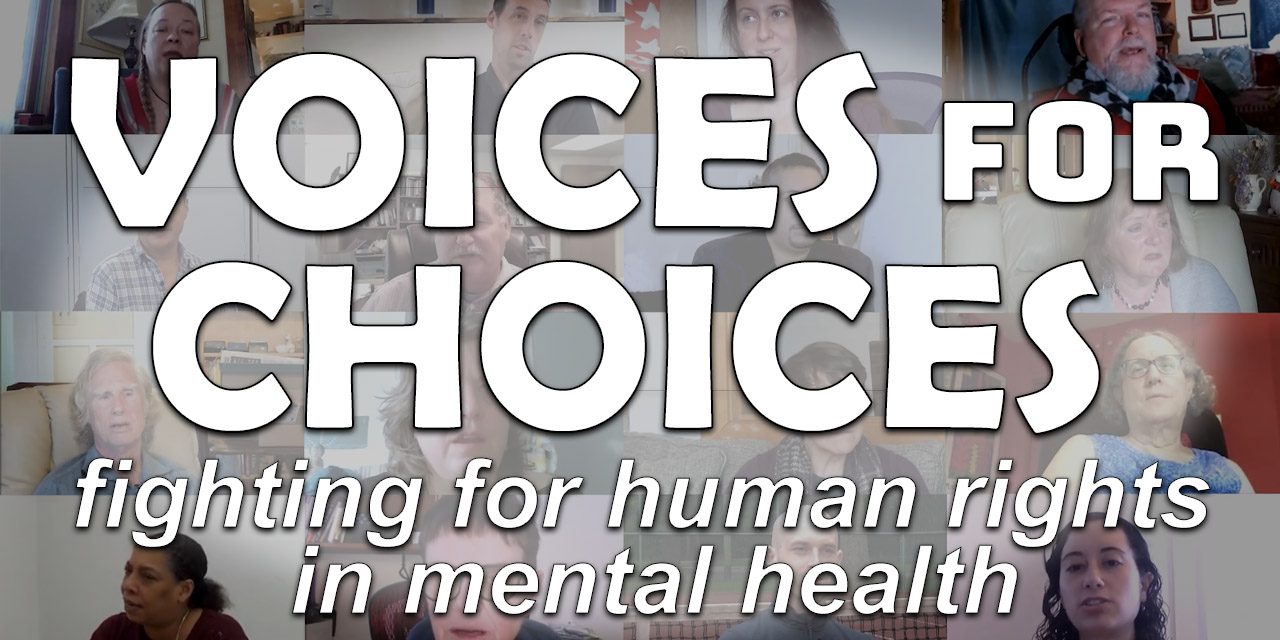 Two summers ago, I watched as a good friend of mine in North Carolina was involuntarily committed to a psychiatric hospital.  Though he posed zero risk to himself or others, he was handcuffed, forcibly drugged, and locked in a psychiatric hospital for weeks against his will.  I had experienced four involuntary commitments in my life, but witnessing him go through this traumatic experience led to me researching resources that could help him in his situation.  By the end of the summer, I’d traveled out to the west coast and met with members of MindFreedom International, and I began getting involved in what I came to learn was the consumer / survivor / ex-patient movement.

There was almost a decade between my first involuntary psychiatric commitment and my learning that this movement existed.  Years were spent unnecessarily stumbling along on my own, seeking alternatives, trying to find allies, but always be alone in this journey and being hindered by constant self-doubt.  Much like when I started getting involved in alternative education and it took a couple years before I discovered the already-existing world of self-directed learning and unschooling, I saw there was a need for a focused effort to connect those in need to the existing movements and resources that were available to them.

It was with this need in mind that the Voices for Choices video series was conceived.

This video series, which consists of 13 videos, was a collaboration between many individuals including psychiatric survivors, alternative practitioners, artists, journalists, writers, and activists.  I am grateful to have been given the opportunity to be a part of this project.  I want to specifically thank a few people for their work.

First and foremost, a special thanks to Sherri Huang, the Editor and Associate Producer who poured endless hours into video editing and making critical editorial decisions that steered this project in a direction that would maximize its integrity and impact.  Her journalistic approach, creative vision and detailed editing skills have no doubt transformed this video series from being an amateur home video project assembled by a novice learning to use a camera for the first time into a professional, first-rate journalistic production that will change countless lives.  I am incredibly grateful for the sacrifices she made with her time to bring Voices for Choices to life.

I also want to thank the team at MindFreedom International, especially Sarah Smith, who was the champion of the grant which included the Voices for Choices series.  While I was a part of the brainstorming session to plan the video, it was Sarah who took the lead in organizing all the documentation and drafting the grant proposal, securing the funding, and accommodating the regularly shifting deadlines that arose from my poor planning and execution.  I’m incredibly thankful for her making this project possible and being understanding in all the delays and requests for time extensions that I begged for.  The Steering Committee including Cindy Olejar, Mary Maddock, Jim Maddock, Celia Brown, Ron Bassman, David Oaks, and Sarah Smith was also invaluable in navigating this long process of creating these videos and I am thankful to have had their experience and guidance.

I also want to extend a sincere thanks to the Foundation for Excellence in Mental Health, whose financial support made this project possible.  While I am often skeptical that receiving funding for creative projects can potentially limit their freedom to free speech, the Foundation was incredibly supportive of our work and I’m grateful that I never felt constrained or fearful in the creative process.  Thank you for believing in this project.

I want to thank all of the interviewees involved in the project: Kumail Akbari, Frank Blankenship, Erik Bray, Celia Brown, Oryx Cohen, Emily McMurphy, Sera Davidow, Janet Foner, Al Galves, Chris Gordon, Jim Gottstein, Peter Gótzsche, Chris Hansen, Jill Kesti, Mary Maddock, Hilary Melton, Grace Nichols, David Oaks, Opeyemi Parham, Ron Unger, Robert Whitaker.  I want to thank them not just for their time, but specifically for their trust.  It is not easy to have someone point a camera at you and ask you questions about such challenging subject-matter, knowing that they will be cutting and splicing your words into a larger story.  I’m not sure I have that courage and am inspired by all those who did.

I want to thank my long-time friend Mark Sturgess and his partner Adam Carver for providing the music accompaniment.  I’ve wanted to collaborate on a project with Mark for years and finally found the perfect opportunity.  The music in this videos really captures the emotional tone in a way that I never could have imagined.  Thank you for lending your talents to this project.

Lastly, I want to thank Sean Blackwell.  I first discovered Sean’s YouTube series “Bipolar or Waking Up” in 2010, just a couple years after my involuntary commitment.  It was the first glimpse I ever received into their being an alternative path to interpreting my experiences.  I would say that his work directly inspired the strategy behind creating Voices for Choices series nearly a decade later.

Without further ado… please enjoy Voices for Choices and share them with everyone you know! We’ll be releasing one video every week for the next 13 weeks.  I can’t wait to hear what you think!

June 24, 2019
GET INVOLVED!
Want to be among the first to hear directly from us about our work? Sign up now.
Go to Top